Sadie is in her third year at St. Cloud State University, studying to receive her Bachelor of Fine Arts with a concentration in 2D Media. Getting to this point, though, has not been easy. She recalls, “When I was 8 years old, I woke up with a migraine and haven’t gone a day without since.”

Four years later, she contracted mononucleosis, which caused her to develop Dysautonomia, a condition that may lie dormant until an illness prompts it to emerge. More recently, she received a diagnosis for MASS Phenotype, a connective tissue disorder. She explains, “These conditions cause pain, fatigue, dizziness, fainting and vertigo.”

Forced to rely on others for assistance, Sadie says, “I would have to ask my boyfriend or mom to bring me Gatorade, help me stand, get me things so I could raise my legs, and would use them for support when standing or walking.” 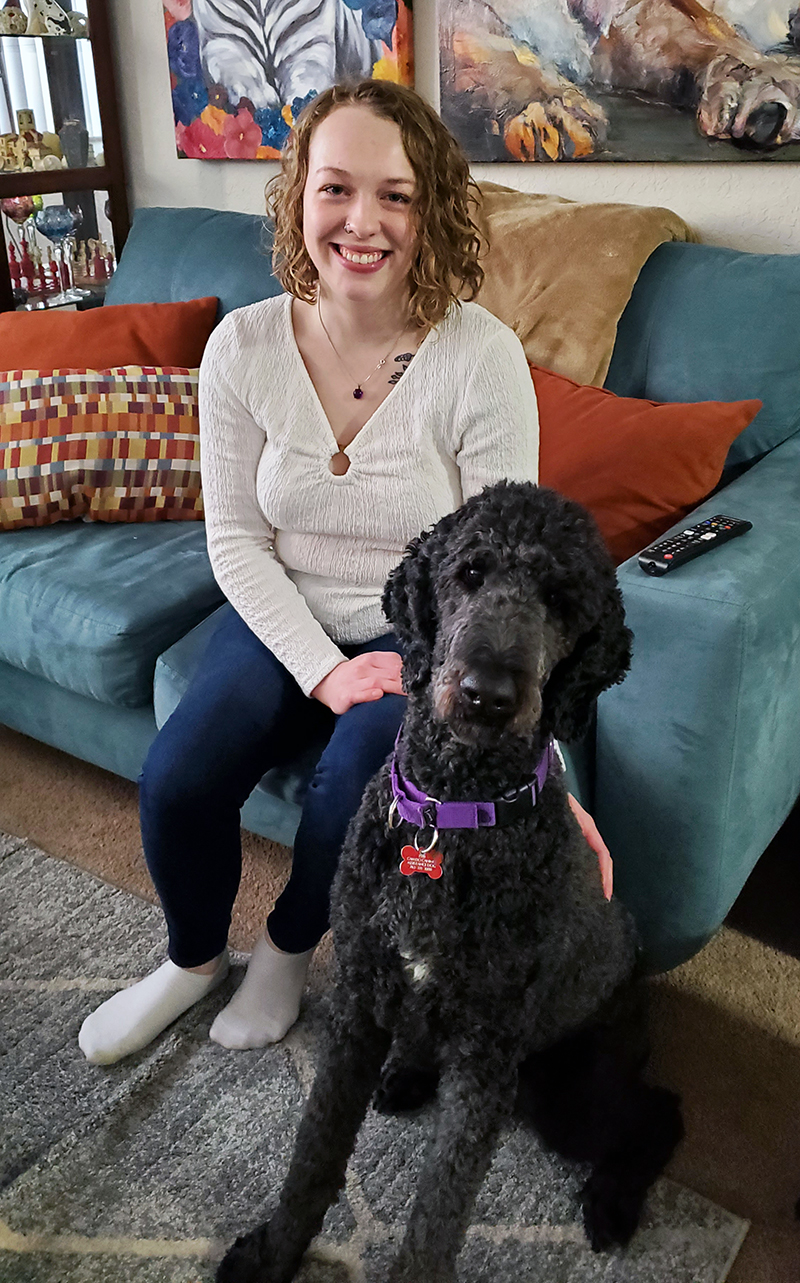 Frustrated with this lack of independence, she found Can Do Canines through the Assistance Dog International website. Now, it’s Mobility Assist Dog Harry who’s providing most of Sadie’s assistance. Some of Harry’s skills include picking up clothes for her, getting drink bottles and helping her to stay standing. Sadie recalls one moment during a class when Harry was particularly helpful, saying, “My professor was showing us a demo, so I was standing and started to feel faint. I was holding on to Harry’s ears because I had been playing with them, when I started to sway. Harry stepped in front of me and I held on to his handle until I started to feel better. It seemed like he knew exactly what I needed in that moment.”

Whether Harry’s helping Sadie to get up, by allowing her to use him to brace her weight on him, or to stay down, by letting her rest her legs on his body when she’s feeling faint, he takes his position as her service dog with great responsibility. Sadie says, “Once he has his gear on, he seems to understand it’s work mode and becomes much more serious and attentive.” But when the vest comes off, Harry’s silliness turns on. “He wants to [lick] your fingers and play,” shares Sadie, who is charmed by his tail circles and chin kisses.

With Harry, Sadie is able to be more active, herself. She says, “I feel so much more comfortable being alone out in public now knowing I have him by my side if I need help.” Also noting that she is grateful to be able to draw from Harry’s confidence, Sadie adds, “He helps me by giving me the independence to go to campus and work on my art.”

They will soon paint a new chapter in their life when they expand their horizons even more. “I’m looking forward to studying abroad in Alnwick, UK, over the summer,” reveals Sadie. “I had never thought it would be possible to travel, but having him with me there and on the flight has given me the confidence to register for the program.”

Harry’s assuring presence is allowing Sadie to reach for these new heights. She acknowledges, “I’m incredibly thankful to have Harry in my life. He’s so in tune to my emotions as well as my health. He’s been such an amazing addition to my life.”

Two Can Do Canines Supporters to Bike Across Canada, Raising Funds for Can Do Canines
Next Post: Two Families Celebrating Two Decades of Service