“I can do weird things with my joints.” This statement by George is not a source of pride, but rather, a source of pain…real, physical pain.

George, who is 18, has a type of hypermobility spectrum disorder, possibly Ehlers-Danlos Syndrome. The challenges are related to his body’s connective tissue. He explains, “The ligaments around my joints just are super stretchy. There's nothing holding them in place.”

George’s struggles got worse as he got older, with hip and knee dislocations happening several times a day. Three years ago, he began using a wheelchair but says he didn’t expect the transition to be so difficult. He shares, “I knew that it was something that I needed to do to survive and stay safe, but I didn't realize how much of my independence would go just because the world is built for able-bodied people.” 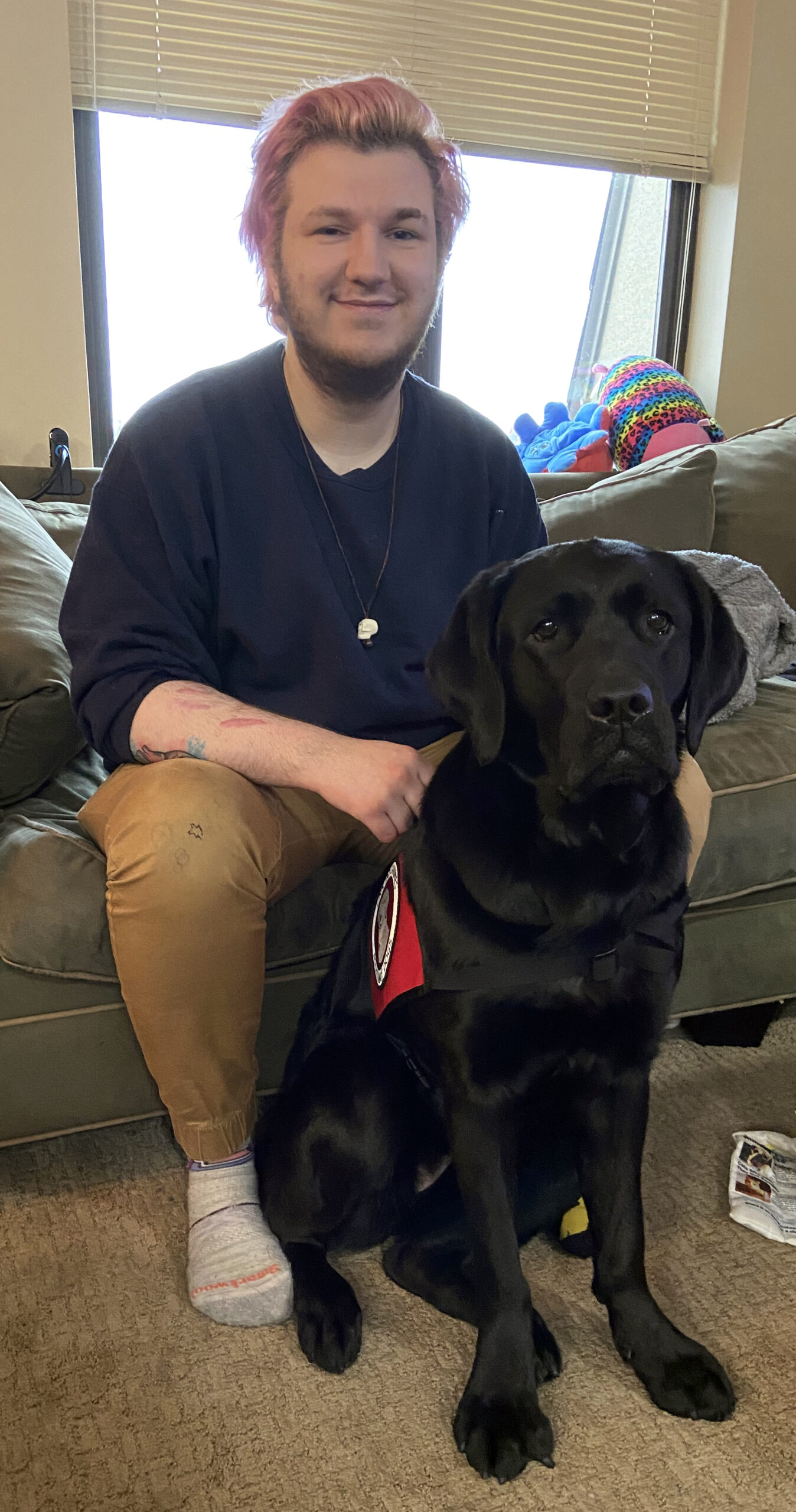 He also didn’t see the amount of relief for dislocating joints as he had hoped. “There were a lot of issues with leaning down and trying to grab things that would make my hips dislocate or create some chronic pain in that area.” He admits, “I needed a lot of help and I was trying to figure out ‘How can I be an actual teenager and go out into the world and do my own things?’”

During some conversations he had with physical therapists, they recommended he consider getting a service dog. So, George found Can Do Canines and was matched with Camilla, a black Lab Mobility Assist Dog. As opposed to his wheelchair transition, this one “was a lot easier than I was expecting,” he recalls. From their initial head-first nuzzle together, the two were hooked. George’s mom had a relieved reaction too, as George says that when Camilla “started to showcase some of her skills and some of the things that we would be working on together, my mom teared up a little bit.”

Some of the skills that are now a part of this pair’s life together include Camilla picking up dropped items, pressing push plates, opening doors and interrupting tics that George might be having from Tourette’s, which he also has. “If I'm bouncing my leg,” he says, “then she'll come and put her head on my leg and push down. So it either draws my attention to the fact that I'm doing it or forces me to stop doing it.”

With Camilla, George’s life is opening up. “It's definitely increased my independence. And as an 18-year-old, that's kind of a big thing for me.” Whether it’s going together to George’s work at a bath and skincare supplies store in the Mall of America, the Science Museum, or any number of businesses, this “old soul couple,” as George describes them, is exploring new horizons. Before Camilla, George didn’t have the strength and stamina to do the volunteer work he enjoys. Now, he plans to begin doing so again at Abbott Northwestern and also as a facilitator at a nonprofit organization in the Twin Cities called Transforming Families. Transgender himself, George became part of this organization’s support community several years ago.

This fall, as he and Camilla begin attending classes at the University of Minnesota, George plans to pursue a degree in gender and sexuality, possibly leading toward a medical career in the future.

He recognizes the ease that Camilla will bring to achieving these goals and commends those who helped make her possible for him. He says, “I am super lucky to get her and her weird personality and her goofiness, and a lot of people made that happen.”