Seventeen years ago, at the age of 45, JodiAnn’s independent life as she knew it changed overnight. She experience a brain stem stroke, leaving her with balance issues that caused frequent falls—one that even resulted in a broken hip. For her own safety, her doctors and her children recommended that she no longer live alone. Her daughter moved in, and just like that, her sense of independence was gone.

“I was never allowed to be alone,” explains JodiAnn. “My kids worried about me a lot, so I had to live with my daughter. She went with me everywhere.”

Then along came Wilma, JodiAnn’s first Mobility Assist Dog from Can Do Canines. The duo was together for 13 years before Wilma passed away in 2020. During those years with Wilma, JodiAnn was able to regain her independence.

“I had the freedom to do things and go places,” she reminisces. She also realized Wilma had helped with simple everyday tasks like just picking up her shoes, which she struggled with again in her absence. “I didn't realize how much I needed her until she was gone.”

Being without Wilma made it difficult for JodiAnn to even want to go outside or do any of the things she enjoyed doing. “If I dropped my keys, I was at the mercy of strangers, asking them to pick up my keys,” she explains. “And I didn't feel safe with the grandkids, taking them places.” 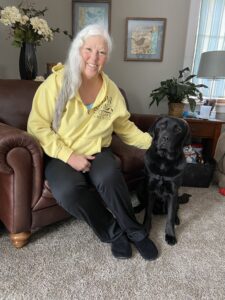 Although it was hard for JodiAnn to move on after losing Wilma, she knew she needed to get another assistance dog, so she reached back out to Can Do Canines. That’s when she was paired with Alvin, a nearly 3-year-old black Lab. She brought him home in December 2021, nearly a year after she lost Wilma. He’s been a constant companion and very affectionate since the first time they met. “I call him a ‘velcro dog,’” JodiAnn jokes. “If I'm in the bathroom, he has to guard me from the toilet paper, I guess. He always wants to be right there. He's very loving.”

With Alvin, JodiAnn has had to learn some new cues; the commands Alvin learned during training were more extensive than those taught to Wilma. She keeps a sheet with the commands next to the couch so they can practice together after work. Besides picking things up, pushing buttons, and taking off JodiAnn’s socks, Alvin is also able to open up the door for her. He also likes retrieving her closest pair of shoes. “Whether they match or not is unimportant to Alvin,” JodiAnn says with a laugh. But perhaps JodiAnn’s favorite task of Alvin’s is one that came as a surprise—when he pulled the covers over her in bed for the first time. She couldn’t help but chuckle in disbelief. It was such a funny moment, showing how much he cared about her comfort and security in a way only a well-trained dog could.

On a more serious note, though, Alvin has given JodiAnn back her sense of independence. “I don't worry about things as much,” she says. “When we're outside and if I fall, he can retrieve my walker and bring it right to me so I can get back up. He picks up my car keys, my wallet. That is a big independence thing for me and makes me want to go out.”

Prior to teaming up with Alvin, JodiAnn had been contemplating selling her house and getting into a different living arrangement. But with Alvin as her new partner, she was able to stay in her own home and maintain her freedom and self-sufficiency.

Alvin enjoys working and “wants a job to do all the time,” but JodiAnn recognizes that playtime is equally important to his well-being. He likes playing in the yard with JodiAnn and her grandson’s cat, and she looks forward to bringing him to the park across the street when the weather is nicer. “Sometimes he just needs to be a puppy,” she says. She also enjoys bringing him to church and is looking forward to taking Alvin on a road trip from her own Northern Minnesota home to visit her son in Duluth.

While JodiAnn has been able to form a successful partnership with Alvin in their time together, that doesn’t mean she has forgotten about Wilma. “They become such a part of your lives,” she says of her assistance dogs. “I wouldn't be able to live alone if it wouldn't have been for Wilma and Alvin. [Can Do Canines] made that a possibility, and their training is great. And I love that [Can Do Canines] spends the whole journey with you. I mean, in all the years I had Wilma, I knew they were always there for me if I needed help or questions or anything. They’re always right there, and that was comforting to know that I was not on my own.”

And now with Alvin and Can Do Canines’ continued support, JodiAnn is not on her own going forward.