With three of her close friends already having Can Do Canine dogs of their own, Jessie was ready for her turn. She says of her friends’ assistance dogs, “I just saw how much they could help them in their everyday lives, and I thought, ‘Oh my gosh, I want that!’”

Diagnosed with spinal muscular atrophy at age 1, Jessie, who is now a sophomore at Century College, has always had to rely on other people to do things for her. She uses a wheelchair and has limited mobility in her arms. Typically a family member or friend is always within earshot, and Jessie says, “I can never be by myself.” 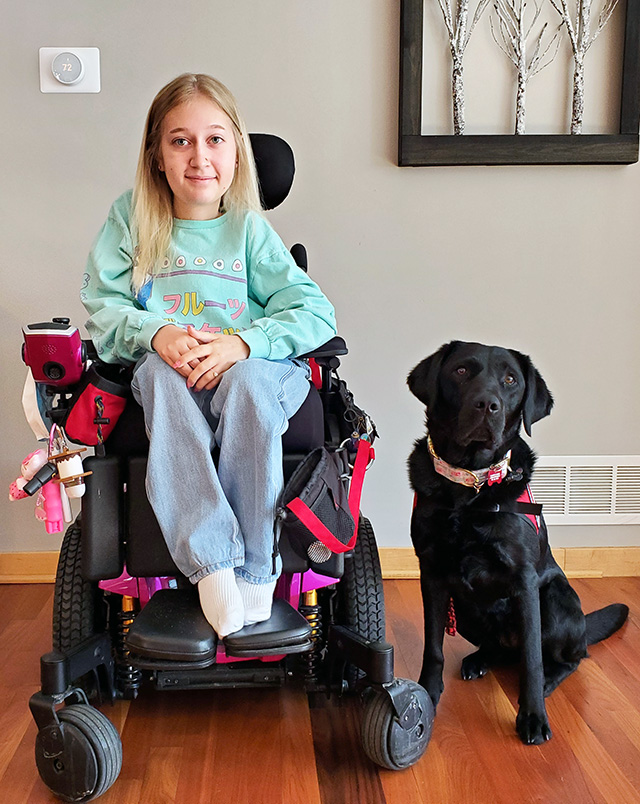 A beautiful black Lab named Athena is making sure she never is. Now that Athena is with her, trained as a Mobility Assist Dog, Athena activates push plates, gets Jessie her phone charger, brings her snacks from the fridge, opens doors and so much more. Jessie says, “My foot always falls off my footrest and I can’t get it back up, so she takes her nose and puts it back up there.” Also, when Jessie pulls up to a table, the joystick on her wheelchair might move off to the side. She tells Athena “Side” (the command for going to the right side of the body), and then “Arm” for Athena to correct the joystick placement. “I love watching how excited she gets to do everything,” Jessie says. “I barely even finish saying the cue and she’s already doing it.”

Jessie admits that having Athena has brought some adjustments. First of all, she is getting out of the habit of feeling like she needs to ask her mom or someone else for help. She instead corrects herself to think, “Oh wait a minute, Athena can get that for me.” Also, morning routines are different with having to feed Athena and get her outside. Laughing, Jessie explains, “I don’t really sleep in anymore.” And Athena is definitely a morning “person,” according to Jessie. “Every morning when she wakes up, she grabs her toy and makes these Chewbacca noises, growling, because she’s just so excited to be awake.” In fact, Athena was known to be an overachiever in training, and that characteristic remains. “She likes to show off,” declares Jessie, adding, “when I tell her to clean up, she’ll grab two toys in her mouth at a time.”

Jessie stresses the increased independence that Athena has given her. “She’s able to do things for me that I never really thought I could do.” That alone is alleviating concerns for Jessie. One day, she dropped her wallet at Target and recalls thinking, “This is not good.” She says, “I wouldn’t usually go up to someone. I’m a shy person, and people don’t usually ask if I need help, so it was nice having Athena there to get it.”

Jessie expresses her gratitude, sharing, “Thank you to the whole organization, the trainers, the coordinators and everyone for taking the time to do all this for me and other people.” She also mentions the prison programs. “I think that’s so cool, that the prisoners get that opportunity. I think that’s amazing!” Additionally, Jessie applauds those who donate to Can Do Canines, saying, “It’s just really cool that people are willing to do that.”

As for her Can Do Canines gal pals, they think it’s cool that Jessie now has an assistance dog of her own. “They were really excited,” admits Jessie, who is busy scheduling dog playdates with each one of them. They have one down and two to go. And when Jessie needs to go most places these days, the two who go are Jessie and Athena.