Walking along the street in downtown Rochester, Deb Nelson came across a woman with a service dog wearing a Can Do Canines cape. The graduate’s story about the ways her Diabetes Assist Dog improved her life left Deb wanting to learn more. Deb visited Can Do Canines website, attended a presentation, and toured the facility. “As I became more confident that Can Do Canines was an organization that I wanted to be a part of, I completed a volunteer application and went through the home visit to be approved. We were approved to be fosters in May of 2016,” Deb recalls.

Deb and her family started their volunteer journey as Short-Term Fosters, then quickly moved on to Long-Term Fostering Ynda, a Goldador coming out of the prison program at FCI Sandstone. Deb remembers, “It did not take long for Ynda to become a member of our family and we all fell in love with him. He was with us for about 7 months before he went in for final training. He became a Hearing Assist Dog and graduated in October of 2017 and we were so excited to be given the opportunity of presenting him at his graduation.” 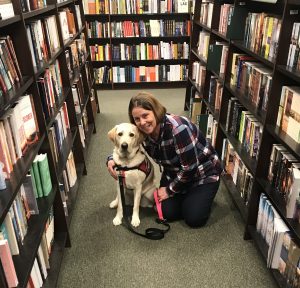 When asked what has surprised Deb about volunteering with Can Do Canines, she replies, “We knew going in that it would be very difficult to say goodbye to the pup when it was time for them to enter into final training and it is definitely very difficult.  What surprised me was the way the pain of saying goodbye slowly turned to joy as we were provided updates on Ynda’s progress in final training and his eventual match with a client and their certification and graduation. I was a bit fearful that when we saw him again at his graduation the pain would return, but it didn’t. We felt only happiness and joy.  When it was time to say our final, final goodbye, we were very much okay because we knew he was exactly where he was supposed to be and he was with the person he was supposed to be with.”

After Long-Term Fostering Ynda, Deb and her family decided to make the leap and became Puppy Raisers. They received Quirk in April of 2017 when she was just 10 weeks old and have had her since. “Puppy Raising was a completely different experience than Long-Term Fostering. It was challenging but at the same time so rewarding as Quirk caught onto the various skills we were working on,” Deb says.

She continues, “Taking a little puppy on outings in public was fun as she received so many smiles and comments from strangers. Quirk is now 2 years old and going into final training. In our last days with her, I have spent a great deal of time looking back at our time together, going through videos and pictures and I’m just amazed at how far she has come. We can’t help but feel grateful at being given the opportunity to have played a part in her journey.”

With the recent addition of Federal Medical Center in Rochester, Deb has also helped conduct home visits for foster applicants, assisted with events like graduation and the Fetching Ball, and participated in the Can Do Woofaroo. We are so grateful for the abundant support she and her family give. In Deb’s own words, “It takes a village to raise these puppies and Can Do Canines has the best!”