Tim Roufs and HAD Bentley
By Anonymous

Tim Roufs’ 7-year-old granddaughter insisted he needed an assistance dog to save his life if the smoke alarm went off at night. “It took her about six months to convince me it was a good idea,” Tim admits. “What it boiled down to was I couldn’t come up with any good arguments for why I should ignore her advice. And, she was right, I do need a dog to save my life.”

Tim is completely deaf, and although he uses cochlear implants, they can’t be worn all day and he doesn’t wear them at night. This can mean that Tim is in danger of missing important sounds like an intruder or the smoke alarm. 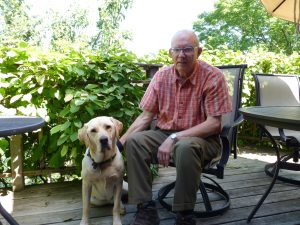 After researching assistance dogs, Tim decided he wanted to train his own. He learned that Labrador Retrievers make excellent assistance dogs, so he chose a yellow puppy from Royal British Kennels in Milaca, Minnesota and named him Bentley. Now that he had the dog, he needed to start training him.

Tim’s wife, Kim, shares that the couple wasn’t aware that organizations bred and trained Hearing Assist Dogs; in fact, they were referred to Can Do Canines in a very unique way. Kim was speaking with a representative at the Children’s Theater and Bentley came up. The representative, a Can Do Canines volunteer named Jessica, talked about the organization and encouraged Tim and Kim to reach out for more information regarding training.

When the couple reached out to Can Do Canines, Bentley was about six months old. Tim and Bentley were on the right track, working on basic training with a local trainer as well as going on many public outings to work on Bentley’s exposure in the busy world.

When Tim determined that Bentley met the age requirements as well as the minimums for basic training, he submitted his application for training through the owner-provided program with Can Do Canines. Tim says with a level of seriousness, “It was easier to get tenureship as a professor of Anthropology than it was to get into the owner-provided training program. It is a similarly satisfying achievement.”

After seven months of dedicated training under the supervision of Can Do Canines, Tim and Bentley officially became a certified owner-provided Hearing Assist Dog team.

Throughout the process, Tim received a significant amount of support from his family.  Kim and their grandkids have been particularly helpful with training. According to Kim, all the hard work and effort is worth it. “I have peace of mind now when I travel and Tim is home alone; he has Bentley to let him know if there is an alarm or siren or someone at the door or any other sound. I don’t worry at all about Tim being here alone anymore; it is nice and it is comforting,” she says.  Tim readily agrees. “And, it is a testament to my granddaughter. She gave me good advice; I don’t need to worry about sleeping through a fire anymore,” he says.

Tim humbly acknowledges and expresses great appreciation for his trainers, Kelly and Elizabeth. The success of the team’s training is exemplified in Bentley’s confidence to alert Tim to new and unusual sounds and Tim’s total confidence that if Bentley alerts him he can trust Bentley to be telling the truth. Tim observes, “It is a tribute to Kelly and to Can Do Canines training program—I can fully rely on Bentley to let me know what is going on around me.”

Tim and Kim extend a heartfelt thank you to the donors who make Can Do Canines possible.  The team is also active as ambassadors wherever they go—ambassadors for Can Do Canines and all assistance dog users. Thank you for your part in making this incredible duo possible!

Thank you to all those who made this partnership possible:
Field Trainer: Kelly Brunson
You: Thank you for your donations!