For nine years, Paul’s stress and anxiety was alleviated by Autism Assist Dog Dawson, a Smooth Collie. By any measure, their relationship was an unmitigated success as they attended elementary and middle school together. But then things took a turn. Dawson started slowing down, developed arthritis and had trouble seeing. Ultimately, Dawson’s worsening health led to the need for a new Autism Assist Dog. 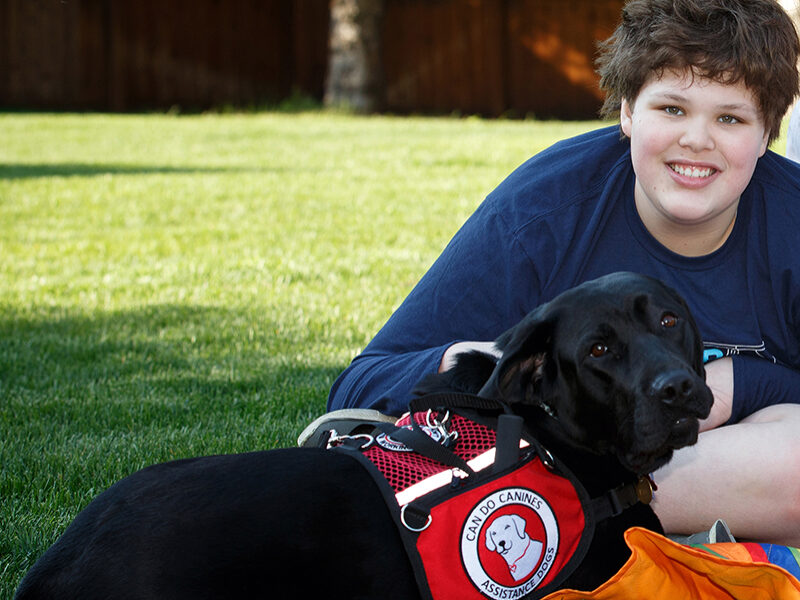 Earlier this year, Paul was matched with Rafi, a black Lab, allowing Dawson to retire as their family pet. Rafi is a third-generation assistance dog for the Can Do Canines Breeding Program and was raised at FCI Rochester.

Paul’s mom, Cecilia, says, “Rafi is a great addition. He has different skills that Dawson didn’t have.” She explains that having a dog lick Paul’s hands and feet can help him calm down. “Licking is a huge sensory input for Paul. It’s great to keep him balanced, to keep him level, and just to distract him from what’s going on in his mind for the environment . . . “It’s something that Dawson would do once in a while, but it’s something that Rafi does all the time.”

Getting to sleep at night often poses a challenge for Paul. He likes cuddling and pressure, but Dawson has not been able to jump up on his bed for quite a few years. Rafi has now jumped in to assist, and Cecelia says, “It helps with that anxiety of being alone. It enables [Paul] to sleep better.”

Paul is also sound-sensitive and dislikes crowds. Dawson’s calming presence made him able to go to stores and kept him regulated at school. “Dawson has been a great, great help for Paul, because school really represents a lot of anxiety for him,” Cecelia says. “For example, at the beginning, we didn’t start having Paul go on the bus to school, but then, with Dawson, it made a huge difference. It made the school bus a possibility. Dawson was a companion who helped decrease any kind of uncertainty or anxiety. Also, it’s important for friendship. We were able to train every single student in the school about what he represented, how he behaved. Many kids were really attracted to Dawson, so they, actually, got closer and closer to Paul and asked him for his name or asked how old Dawson was. That allowed Paul to have some social interaction with kids that normally he wouldn’t have had.”

Now 16 years old, Paul is six-feet, three-inches tall, weighs around 260 pounds, and has a big, booming voice. Cecelia says, “He’s a teenager. He’s moving faster, he’s moving stronger. It’s not a job that Dawson can do, so that’s why we reached out and we got Rafi.” However, while Paul has developed, physically, he is still about six years delayed emotionally and cognitively. He still likes playing fetch with the dog, and that is a win-win for both Paul and Rafi. “They go to play outside, and that’s the beauty of it,” Cecelia says. “That connection.”

Rafi is also able to help Paul get the exercise that he needs. “We are now back on daily walks, sometimes twice a day for 20 minutes each around the neighborhood,” Cecelia says. “Rafi’s speed is much faster [than Dawson’s], so he’s accelerating Paul’s pace, which is fantastic.”

Now with both Dawson and Rafi in the home, one of Paul's duties is taking care of both dogs. Was there any concern about bringing a new dog into Paul’s life? “Because of Paul’s love for animals, I never had a doubt that another dog would be a problem,” Cecelia says.

Paul's family has seen how the dogs have helped those in need, and they appreciate all the efforts that other donors and volunteers have made to bring them Rafi. “It’s a big thank you from the bottom of our hearts,” Cecelia says. “From our family to yours, thank you. Our life would be completely different if we didn’t have Dawson, and that’s why we are such big advocates for Can Do Canines. It wouldn’t be possible without all the families that have all contributed. And, thank you to the inmates, too. They put in the time and the work and the effort. At the end of the day, it makes a difference and, hopefully, you can see the difference that it makes in Paul’s life and how it makes him feel.”

Increasing Mobility and Stability With Shelly and Levi
Next Post: New Section Being Added to Website for Client Resources