Zachary was in eighth grade in 2007 when he suddenly felt sick one day. What was initially suspected to be the flu ended up being bacterial meningitis—an illness that landed Zack in the hospital for 161 days. His mom, Desiree, explains, “Day by day we could see as the blood flow was being compromised to extremities, things would turn purple and then black.” Gradually, Zack had to have his right hand amputated above the wrist, as well as the fingers and thumb on his left hand and both of his legs below the knees. He also lost most of his hearing.

What didn’t get compromised was Zachary’s fighting spirit and positive attitude. After being released from the hospital and returning to their rural Wisconsin home, Zack and his family began to discuss getting an assistance dog. Desiree recalls, “I started doing the research and checking into what was out there and seeing how expensive service dogs were and then realizing when I contacted different places that they would train for assistance or they would train for hearing, but they wouldn’t train for both. As I was Googling cross-trained assistance dogs, I happened to come across Can Do Canines.” 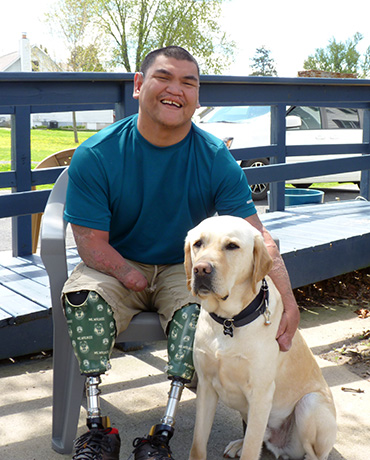 Their excitement upon Zack being accepted as a client was only slightly less than when he received a beautiful yellow Labrador Retriever named Oxley, trained to help him with both hearing and mobility tasks. “I was just emotional,” says Zack of getting paired with his new partner. Plus, the family felt the fact that they could travel to the Can Do Canines campus and stay on site for about a week of training “made all the difference in the world.”

The training that Zack and Oxley have implemented in their lives is far-reaching given Zack’s needs. Although he now uses a powerchair, has prosthetic legs, uses pincers for grasping and has had cochlear implants placed in his ears, Oxley eagerly complements Zack’s life by alerting him to sounds, tugging open doors, and picking up and retrieving items. In fact, sometimes Oxley acts on his own with their best interests in mind. Zack explains that the two of them will usually go for a walk after Zack gets home from work. However, with unpleasant weather one day, he took his legs off right away. He shares,  “I was just sitting in my chair, and all of a sudden I got a nudge. It was Oxley, so I said, ‘Show me.’ He brought my prosthetic legs over one at a time and sat right there like ‘It’s time to go for a walk.” Zack got the hint!

Oxley’s caring personality is just part of what makes Zack so fortunate for this extension of his life. “I never knew there was a dog that was so respectful and caring for a person in need,” says Zack. To those who helped make this happen, he adds, “Thanks for giving me a dog that adores working.” Desiree agrees. “We appreciate so much that [Can Do Canines assistance dogs are] provided free of charge for people that need them. When you have a disability, you’re already on limited income.” The reason for her gratitude is clear. She states, “I feel much safer about Zack being home alone, because I know he’s not alone. There’s somebody there that’s going to help him, that’s going to alert him, that’s going to give him the assistance he needs without a person being there.”

Finding Zack home much at all, though, is not a given. Recognizing Oxley as “empowering,” Zack is not only employed as an assembly worker, but he also volunteers as a custodian at the local fire station and at the community food pantry. Just as he is happy to help, Oxley is delighted to help assist Zack, making them a team worthy of applause.