As a bright, energetic young girl with autism, Ava thrives on structure and routine. She struggles to cope with sensory issues and transitions, and being overwhelmed sometimes leads to meltdowns. Since being diagnosed with autism when she was about 3 years old, Ava has been using multiple techniques and resources to help her handle emotions. Despite many efforts, she still experiences angry outbursts, anxiety, and stimming behaviors. Ava’s family limited activities to try to prevent emotional reactions.

Ava’s mother, Diane, saw a story on the news about Can Do Canines, and the very next day, a co-worker encouraged her to apply for Ava to receive an Autism Assist Dog. Diane hoped a dog would help Ava intentionally choose to connect with a dog instead of reacting to overstimulation, so she began the process.

He’s All Work and All Play 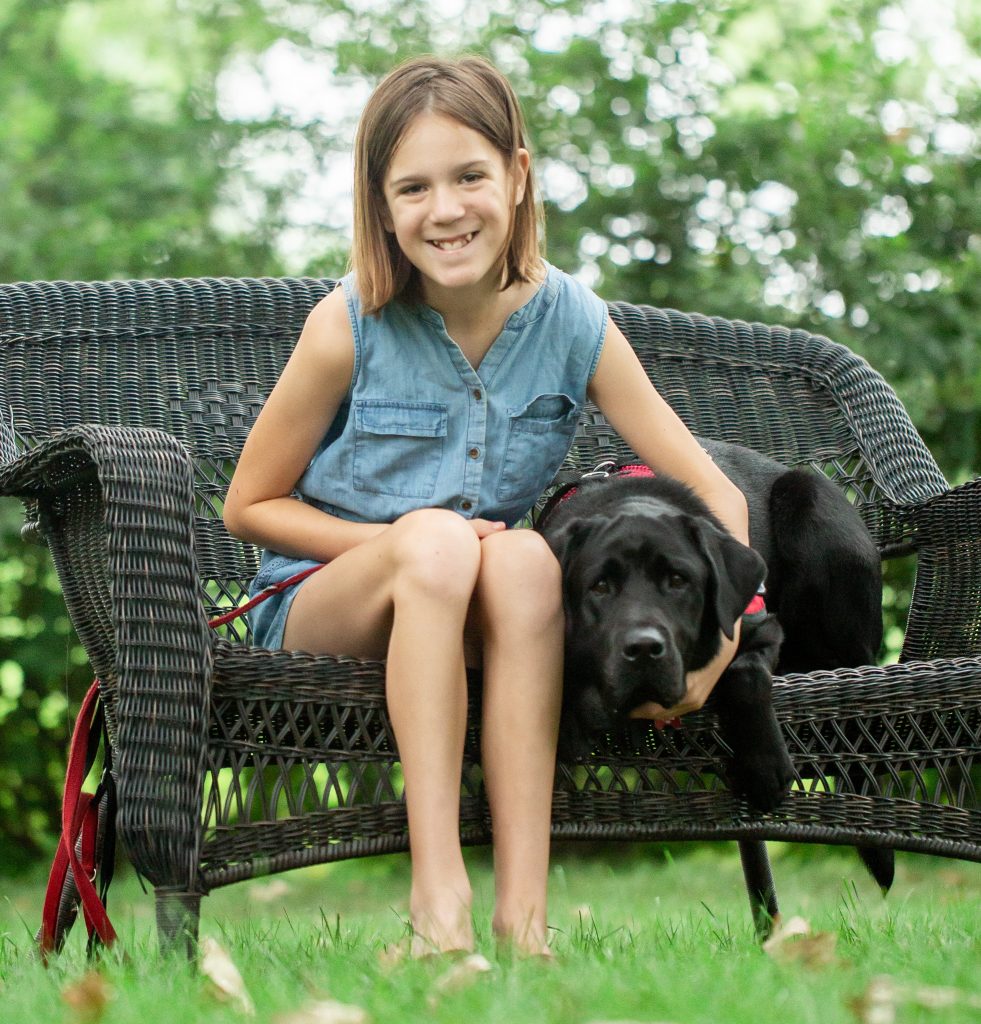 The leap of faith led them to Alfred, a 2-year-old black Labrador Retriever, who is as playful as he is cuddly. Ava remembers being excited to meet Alfred, and when he came home, she had quite a case of the giggles. Their fun-loving energy is a perfect match, though his calm presence still balances out her heightened emotions when needed.

Ava is learning to recall and apply Alfred’s cues, and she is improving response timing, as well as patience, with giving him feedback. Ava has also written his cues on slips of paper, and she pulls them from a bowl to practice together.

When she is feeling overwhelmed or frustrated, she can cue him to “snuggle,” prompting him to lie across her lap to provide light pressure therapy. Ava’s brother, Cameron, even leads Alfred to snuggle with her before a meltdown if her canine companion isn’t near her.

Routine is a big part of Ava’s day, and such a sudden major transition to online school really threw her for a loop. Ava’s frustration and resulting behavior was escalating quickly due to being confined to a space with her siblings in their St. Louis Park home, but Alfred is now able to suppress any major tantrums from erupting. In public, she focuses on holding his cape’s handle to stay safely with her parents. Since the start, Alfred has picked up on her frustrations and has helped her find her calm so that she can better communicate her feelings. He bridges any social gaps with her friends, in particular. Ava tells everyone he is a great partner for her, and that he’s a loving, silly boy, referring to him sometimes as “Dude.”

A Family Ready for a Fresh Start

Diane said it was initially challenging to keep everyone in the family consistent in his training, but they’re proud of what the family has collectively accomplished. They are thrilled with how his full-body wiggle brings joy to all, and look forward to returning to an enhanced routine, thanks to Alfred. “Thank you for doing this for me!” smiles Ava. Diane and Kevin, Ava’s father, add, “We’ve been really impressed with everything from puppy raisers to the prison program. Plus the time and tireless effort from the trainers, and fosters, and all of the volunteers…you can see he was raised with love and respect, and we’ll take care of him.”