Sheila’s life was full of hard work while she was raising a family. It became even harder work once her health started declining. She battled cancer, rheumatoid arthritis, an adult-onset curvature in her spine, and epilepsy, along with chronic pain and loss of bone density. Each diagnosis and battle left her abilities and freedom limited. Through it all, Sheila continued seeking treatments and options to help her continue to live a fulfilling life. 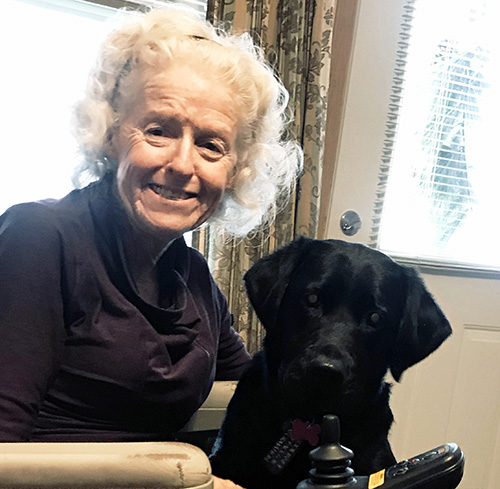 Tatters is a 2-year-old Black Labrador, Golden Retriever mix with all the best traits from both breeds. She’s an engaged, happy, snuggly girl that will pick up anything and everything to help. Sheila is at a high risk of severe harm if she falls or overexerts herself. Tatters prevents her from injuring herself every day by cleaning up clothes, toys, and anything else that needs to be put away by collecting it all in a bin. In winter, the cold is debilitating to Sheila’s arthritis in her hands, but she says, “Anything I can manage pointing to, she will pick it up and put it where I want.” While using her power chair, Sheila is unable to carry larger or bulky items around her home. Tatters helps, dragging items, such as the laundry basket for Sheila.

Beyond her mobility skills, Tatters was trained to recognize and respond to a seizure by laying across Sheila to suppress movement. This keeps Sheila safe and prevents her from accidentally injuring herself. Tatters can then help Sheila regain consciousness faster by licking her face.

The Sky is the Limit

Sheila enjoys how much Tatters has grown to love her new adventure. “The best way is just relax and let her be that dog that wants to help so much,” says Sheila of her devoted partner. Applying Tatters’ skills for personal security has taken a lot of learning for Sheila. She’s had a lot of support from family, friends, and other assistance dog teams that she’s met during the process.

To the dedicated people who helped feed, raise and train Tatters, “There’s no ‘thank you’ that comes close to my admiration for the people who can take a puppy and turn it into this,” Sheila says, gesturing to Tatters. “There are no words to thank the people who have the heart for it.”

Previous Post: « A Dog for When She’s (Not) Feeling Low
Next Post: Assistance Dog Brings Partner New Health and Happiness »