Halle has been managing Type 1 diabetes for 23 years, after being diagnosed at just 4 years old. She learned to take care of herself very early on, but with Type 1 diabetes, a person can do everything in their power to control their glucose levels and still experience moments where they rise or fall out of a target range. Halle has dealt with hypoglycemic episodes when her blood sugar level plummets, but she is unable to feel it happening until that “low” endangers her life. Our brain needs glucose to function, so when glucose concentration in the blood drops to a number under 70, most people get certain sensations that warn them of the need to replenish the sugar in their body. Halle doesn’t get that warning, and even the different devices that monitor her blood sugar numbers can’t catch the fast drops. In the past year, Halle’s blood glucose levels have crashed so quickly and gone so low that she ended up passing out. However, thankfully, she has recovered.

What she couldn’t recover from was a growing fear for her safety. So Halle started her research on diabetes alert dogs. When she found Can Do Canines, she applied and was soon allowed to meet the newest member of her healthcare management team. She was hoping for the “someone” that could help her navigate her lows and alleviate the fear of living alone with her detrimental lows…and that’s where the magic match was made. 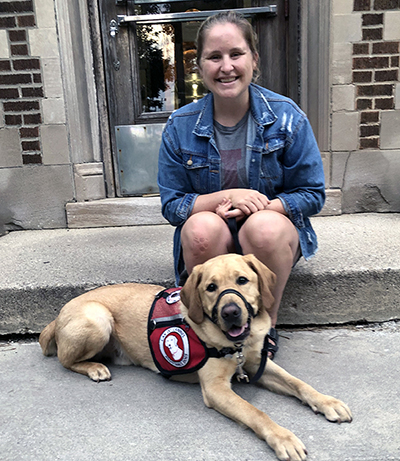 A Devoted Team Goes the Distance

Binx is a striking 3-year-old yellow Labrador Retriever with an intense enthusiasm for playing tug and using his nose. He and Halle spent a lot of time at first learning to settle into a new lifestyle together; their compassionate patience has paid off beyond measure. Once the bond was forged, Binx became confident in realizing what Halle needed. He embraces his sense of smell to the extent that he can identify chemical changes in Halle’s body before she notices them or her equipment detects them. When he senses a low (a drop in glucose levels) about to occur, he gives Halle a very obvious nose nudge, prompting her to check her blood sugar. If she needs additional support, he can retrieve either her kit to check those levels or different sources of sugar, whichever is closest to her. Halle believes that the greatest change of having Binx is “sleeping through the night calmly and assured that I would wake up if there’s a low, or if I don’t, he will hear my Dexcom alarm and alert me.”

Before Binx lived with her, Halle was “always being mindful where my blood sugar was, and doing mini-check-ins,” questioning whether how she felt matched the numbers on her continuous glucose monitor and blood glucose meter. Constantly wondering what could be affecting her numbers, then being able to correct them without causing more complications is an onerous task. Halle has handled the life-threatening guessing game on top of her full-time job and other responsibilities, but now Binx can reduce some of that anxiety. She remembers meeting him and realizing just how different a dog he was with his specific training and how much work it would take to reach their potential. Halle calls Binx “a passionate gentle giant,” and has enthusiastically put the finishing touches on their initial team training.

Halle raves about her Can Do Canines fantastic field trainer and enjoys seeing how excited Binx is to work. She shares, “I’m so grateful for the extra sense of security, not just in the diabetes aspect, but also with the companionship aspect.” Having seen the progress they’ve made together already, she looks forward to that bond just continuing to grow. Halle wants the Can Do Canines family to know, “I love him so much, I just want to say thank you. I did not expect to get this teary! The work you do is amazing, it’s truly life changing. Just…thank you.”