Consider what it would be like to feel completely fine, and then only a moment later, “you’re completely lost.” This is how Malcolm describes having Type 1 diabetes. “You have no capability of doing even the basic tasks. And people don’t often see that when they look at someone with diabetes. They see someone who’s perfectly fine, there’s no issues, and then all of a sudden they’re acting like they have no idea.”

So for Malcolm, it came time for him to try to find some assistance. “I’ve had this illness my whole life. I went a long time where I never really had that many issues, but as I’m getting older, things are getting harder and I have a lot more low blood sugars.” He reports that he simply started to become unaware of his low blood sugar levels and states, “I have a lot more instances where I need someone to help me.” Plus, he was losing faith in his equipment, saying his glucose monitor “definitely helped, but it was terribly unreliable. It could be 20, 30, 40 points off at times.”

Malcolm found numerous videos online of service dogs performing diabetes assistance tasks and was practically at a loss for words. He admits, “I was a little baffled to begin with. I just couldn’t believe that some pet could do this for you. It was kind of like, huh, maybe I’ll have to see it to believe it.” 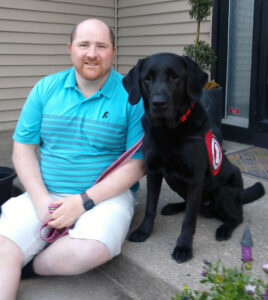 Channeling some optimism, Malcolm applied at Can Do Canines and was matched with a large and loving black Lab named Blaze. “I wasn’t 100% sure what was going to happen, I was more just hopeful of the changes that could happen.”

Blaze quickly proved that he was in his glory alerting Malcolm to his lows. “It’s ridiculous how much [these dogs] can do for people," says Malcolm. “I’m still in shock of the abilities that he has and the things that he catches . . . It’s been a lot more than I had hoped or expected.”

And Blaze has certainly found his calling. Malcolm says, “He’s pretty much caught just about every time my blood sugar has [gone low]. He’s actually prevented quite a lot of situations that could have been quite bad and have been bad in the past before I got him.” That security has helped Malcolm not only physically, but also mentally. “He gives me the confidence that if something is going to happen, there’s that extra layer of defense, catching things before it gets too serious where I can’t deal with it myself.” He adds, “Having him in the house makes all the difference.”

This pair does not just lie low though, and Malcolm now enjoys freedom he hasn’t always known. Growing up, he gave up a lot of experiences because he didn’t want to put people through stress. He felt the same type of burden with his family, who used to worry about him, even as he commuted to and from work. That’s changed, and Malcolm says, “Now I don’t feel that’s the case because if I can go, Blaze can go.” The pair go together to Malcolm’s work at Trustone Financial in Golden Valley, and Blaze also accompanies him to the golf course, where Malcolm says, “All the people there love him already.” Plus, when some of his golf swings force Malcolm to play “lost and found,” Blaze’s cheery personality keeps him from getting discouraged.

Recognizing all the time, dedication and support that countless people have contributed in order to raise these special canines, Malcolm says, “It’s amazing the impact that they have on people’s lives. It makes a huge difference.” And that difference is found in the bond Malcolm and Blaze now share.

Peace of Mind Part II
Next Post: Regaining Independence with the Help from a New Friend, Flirt