Ten-year-old Giovanni loves to go to the park. His parents, Alex and Kristy, explain that since he has Autism Spectrum Disorder, park outings sometimes meant that Giovanni would lose track of where he was in relation to the adult providing supervision. As Alex says, Giovanni would “get in his own world.” 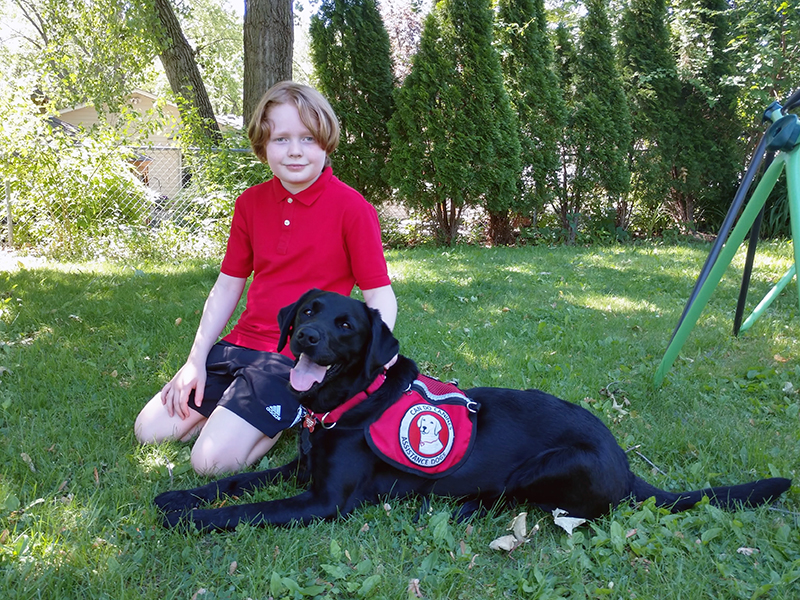 Now, however, Giovanni has Autism Assist Dog Pippi in his world. “She keeps him aware of his surroundings,” says Alex. “He knows she’s around and he looks for her.” And it’s not difficult to pick out Pippi. She’s the black Labrador Retriever with the bright eyes and the tails that doesn’t just wag side to side but in full circles.

Trained for handle-assisted walking, deep pressure therapy and assistance for overstimulation, Pippi is the perfect partner for helping Giovanni stay oriented. Alex shares, “She’s been his sole focus for calming down and keeping him centered.” Giovanni, himself, admits, ““She calms me down when I can’t calm myself down and when something’s bothering me, she gives me something else to think about.”

Sometimes thinking of something else means being able to consider new options. As Alex explains, Giovanni can have a tendency to want to bypass challenges to avoid the stress. “Since Pippi showed up,” Alex says, “he’s had increased stamina for trying out things. He chooses to interact for much longer with his peers at school, and his social anxiety is still challenging for sure. But it’s almost like she gives him a booster of confidence.” He adds, “Whatever she’s doing for him has given him a chance to learn [about] himself better in this world . . .  I’m grateful that he has time with her in his development years to learn better skills that will be useful for him.”

This outcome so far is no surprise to the family. Kristy shares that they learned about Can Do Canines from other families of Fraser Preschool. She says, ““We had just heard great things about what the organization could do for kids like him who are on the spectrum.” Alex notes their appreciation, saying, “Can Do Canines has been this amazing organization full of people that are just passionate about helping others and loving dogs too . . . The way you see people as people, and dogs as a way to help make whatever life has given you a little bit better. That’s a rare gift, and I’m super thankful for that.”

He also applauds the continual nature of training, which helps build the relationships. “It was a relief to know that through Can Do Canines, it’s an ongoing relationship, and if we have questions, there’s always an open door.”

Addressing Can Do Canines supporters specifically, he adds, “Your passion and endurance and dedication to this cause is something that I really admire. It inspires me to do more for others and not get stuck in my own world.”

Who would have guessed that one 3-year-old dog would open up the world to this family in such a meaningful way? If you want to make a world of difference for other families, please consider a donation at candocanines.org.

Scoring the Goal of a Lifetime
Next Post: For Gary, Willow Means Less Falling Down, More Getting Up