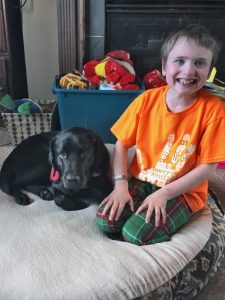 The saying, “when life hands you lemons, make lemonade” is something Jennifer Smart from Shakopee, Minn. has been trying to do for years. Her son Lucas was diagnosed with autism at age two. Around that same time her husband passed away. So for the last five years, Jennifer has worked hard to make the best of a difficult situation. But being a single-parent of a child with autism isn’t easy.

Lucas has frequent meltdowns and—like many children with autism—they seem to occur for no reason. He is somewhat verbal, but primarily he points or uses his hands to demonstrate what he wants. Doctors once even told Jennifer that Lucas may never speak with any clarity. In addition, bolting in public is a problem. Lucas wears a wrist locator because he’s beeen so successful at getting away.

Jennifer explains, “Lucas doesn’t have any fear or sense of danger. He doesn’t understand that he shouldn’t run away from me.”

All of these issues prompted Jennifer to take action. Lucas underwent a variety of different therapies to help both he and Jennifer cope with his autism. Private therapy services, special education pre-school and other services helped Lucas a bit. But it wasn’t until Jennifer observed something in his behavior that the true answer would come. One day, Jennifer noticed that Lucas’ face lit up brightly when he was able to play with a dog or cat. He became calm, smiled and seemed at ease.

So, when a doctor said that Lucas might benefit from an assistance dog, Jennifer applied to Can Do Canines for help. After almost four years of waiting she finally received the phone call that changed her life.

“When Can Do Canines called I was just in disbelief,” Jennifer says.

That call led to a two-year-old black Labrador retriever named Neville joining the Smart home. As an Autism Assist Dog, Neville helps keep Lucas from bolting. When out in public, the burly lab is tethered to Lucas to keep him anchored and safe. At first Lucas was not sure about being tied to Neville, but quickly he got keen to the idea and started to enjoy having a dog by his side. Within a short time it became possible for Jennifer and Lucas to go out to places together without incident.

“Wherever we go—the grocery store—I feel like I can get into the crowd with him and go,” Jennifer says. “How wonderful is that? That’s something that so many people take for granted.”

And those meltdowns that used to occur multiple times each day? They’re becoming almost non-existent. But if a meltdown does occur, Neville will get close enough for Lucas to pet him, snuggle up next to him if he has thrown himself on the floor or will lick Lucas’ face—all which help reduce the length of the meltdown. Within a very short period of time the meltdown is over and Lucas is laughing.

Since Neville has joined their home, Lucas is now not only talking more, but he’s also improved at pronouncing words. He can verbalize his love for Neville, pronounces his mother’s name clearly and can communicate what Neville may need. Lucas is also learning how to be responsible.

“Together they have a special bedtime routine. Lucas puts Neville to bed and then knows it’s his time to sleep,” Jennifer says.

The profound change in the Smart household is all thanks to what Jennifer calls “the back bone of Can Do Canines”— the puppy raisers, donors and volunteers. She says if she knew all the people who helped bring Neville into her son’s life she would “kiss them if she could!” An assistance dog has helped her and her son regain the independence they lost early on.

“I can finally give him the world that he’s been denied for so long. The possibilities are endless and the wait was worth it!” Jennifer says.