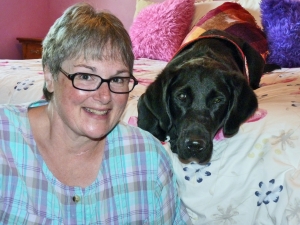 Kelli Heimerl of Chaska, Minn. had been searching for the official diagnosis to her symptoms for a long time. She started to notice little things 17 years ago. It began when she simply felt a “little off” in various ways, but she couldn’t quite put the pieces together. Six years ago significant tremors and muscles shakes began. After consulting with various doctors the official cause still couldn’t be determined. It took four more years before the official diagnosis was reached—Parkinson’s disease.

Despite struggling daily with balance, fogginess, and muscles contortions, Kelli has kept her sense of humor sharp.

“If you’re young you might not get this, but I like to describe my situation as ‘Weebles wobble, but they don’t fall down,’” Kelly says, referring to the toy from the 1970’s. “I look like a drunk sailor. I’m constantly off balance.”

In addition to the tremors, muscle rigidity and cramps, she sometimes has trouble getting all the words out which she means to say.

“I can spell the word, I can see the word, but I can’t exactly speak the word, which drives me crazy,” Kelli says. “Pretty much if it’s a symptom of Parkinson’s, I’ve been blessed with it.”

One day, while Kelli was in the lobby of her veterinarian’s office with her pet dog, she met a woman whose son had an assistance dog. Kelli describes it as a serendipitous moment. Wasting no time, she applied to Can Do Canines and was later paired with a two year-old black goldador (a golden retriever/Labrador retriever mix) named Justeen.

While in training, one of Justeen’s foster-home providers described her as “Incredibly loyal—Justeen is always right by my side.” Mobility Assist Dog Justeen lives up to that reputation by staying close to Kelli and helping in any way she can.

One thing Kelli admits to is struggling with fine motor skills. She says the ability for Justeen to hand her items has been an incredible gift.

“Justeen is constantly picking things up off of the floor for me, because I’m always dropping them,” Kelli explains. Before, picking things up herself would cause dizziness, and often lead to a fall. With Justeen, Kelli no longer needs to risk reaching down.

“It’s the little tiny, humbling things,” Kelli says. “Her gift to me is picking that pen up for the 15th time today. And she doesn’t murmur; she is gracious about it.”

In addition to picking up dropped items and helping to unload the groceries at home, Justeen also helps Kelli feel more comfortable in public. Before the lab joined her on outings, Kelli says she would have difficulty finding a store employee to help her while she shopped. Now that she has an assistance dog, she says she receives immediate assistance.

“They can see that I’m shaking, and for some people, seeing Justeen validates that I have an illness,” Kelli says. “Very few people know what Parkinson’s is, so she’s become an incredible ambassador for me.”

Kelli is overwhelmed with thanks to everyone who helped raise, train, and eventually bring the two of them together.

“I appreciate every moment of the last one year, ten months and twenty eight days you gave me,” she says. “Justeen is the most kind, patient, and loving dog.”