Robbie is an active boy. Like most kids his age, he enjoys hands-on learning and exploring. Robbie was diagnosed with Autism and thrives on calm. He is not able to cope with stressful situations, focus amid distractions, or communicate what his needs are. Robbie’s family each had to learn how they are best able to support him, but they were looking for help to make it easier and allow them more freedom to explore other activities. Roxanne, Robbie’s mother, said he has always struggled with being overstimulated, distracted, restless, and worried about his routine. He would frequently have outbursts and tantrums, and had strict limitations with what he was comfortable doing or where they felt safe going. Without recognizing dangerous situations, he would wander or run and hide. A relative suggested they apply to Can Do Canines. When the moment felt right, Roxanne did just that. Robbie was accepted and matched with his new partner, Stella. 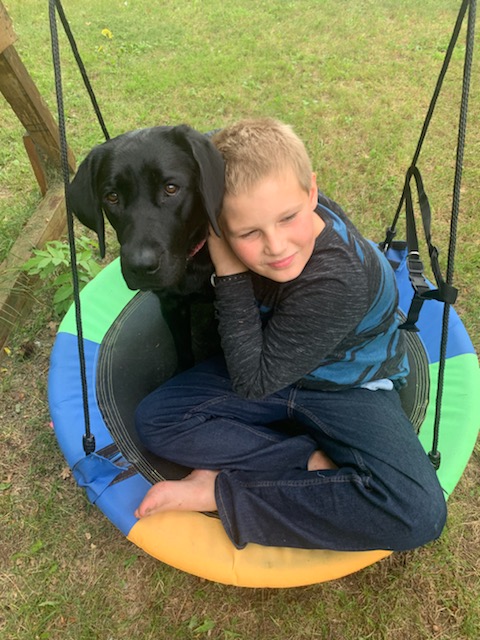 Learning to Include and be Included

Stella is a 2-year-old black Labrador Retriever who loves to play as much as Robbie. Together, the two love to use her skill of rolling a ball back and forth with him. Roxanne comments that having Stella sleeping with him has meant Robbie is finally sleeping through the night. Robbie no longer spends all his time alone. Now he communicates with Stella, who is able to constantly keep him company. And every day, Robbie enthusiastically focuses on performing his responsibilities and routine with Stella’s care and practicing her commands.

In public, Stella is a social bridge. Robbie enjoys introducing her as his Autism Assist Dog. Roxanne laughs that he explains that the cape she wears, complete with a belted tether and handle that connects to Robbie, means she’s working and can’t be pet. Before Stella, the family had to rely on others to help, because Robbie would not be able to handle going out in public or completing tasks. Roxanne says that now she doesn’t have to worry about going out in public with Robbie because Stella keeps him safely connected to her and reduces his level of stimulation. When Robbie does feel overwhelmed, He can prompt Stella to apply light pressure by resting her head or upper body on his legs. This helps him feel grounded and distracts him from what previously made him feel overwhelmed. Roxanne sees Robbie give hugs and kisses to Stella and is inspired as she watches them bond.

A World of Difference for the Family

Roxanne encourages anyone considering an Autism Assist Dog for their child to look into it. On behalf of her whole family, to those who made Stella a possibility, she says “I have to say ‘thank you from the bottom of my heart’ in helping Robbie find a best friend to spend his days with and help him in the challenges he faces with his disability. Stella is an amazing addition to our family.”