The best of friends often get to a point of being able to complete each others’ sentences. In a way, that practice is something Roni and Mobility Assist Dog Eunice have accomplished in just a matter of weeks.

Recently, Roni dropped a bottle of conditioner on the floor and explains, “I started saying the command, and Eunice already had [the bottle] in my hand.” This way of reading Roni’s mind shows just how eager to please the smart, black Labrador Retriever is. In fact, Eunice is so excited to work that the team is practicing patience so that Eunice doesn’t get ahead of herself, but waits for Roni to fully cue her. 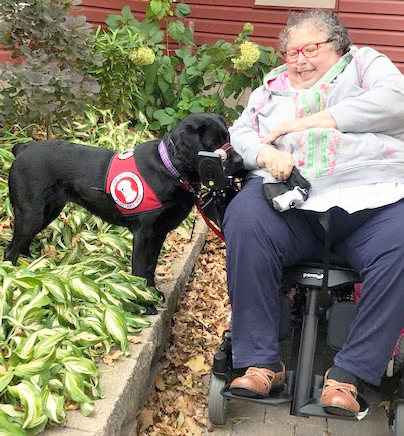 Some of those cues include “park,” for settling under a chair at dinner time, “find Dad,” for retrieving Roni’s husband, Wayne, and “get it,” for when Roni drops something. Eunice can specifically “get” not only the phone and other hard objects, but also softer ones, like printouts off the printer. Roni is especially impressed with how careful Eunice is with tissue, explaining that when cleaning up Kleenex off the floor and putting it in the wastebasket, she doesn’t even chew on it. In Roni’s opinion, “That would be a hard thing to teach a dog.”

These tasks that Eunice performs are critical for Roni, who began to experience nerve damage about 10 years ago. The effects cause her to drop things often and to use a wheelchair, so Eunice’s daughter-in-law, a county social worker, suggested Can Do Canines. “It’s so important for me to be as independent as I can be,” says Roni, explaining her motivation for wanting an assistance dog.

Now with Eunice, she has an assistant who can give Wayne needed breaks. Wayne admits, “These last couple of months have been just delightful.” Roni agrees and says of Eunice, “She’s really excited about doing anything to help.” Inquisitive by nature, Eunice displays a curiosity that Roni jokes is even “a little nosey,” as Eunice tends to check out every little noise and conversation around the house.

Yet, Roni can’t imagine life without her new furry friend now and is grateful to those who helped this pair come together. She says of the Can Do Canines trainers, “They’ve done such a good job at getting [the dogs] ready for their life’s work. It’s almost unbelievable sometimes.” She also commends the volunteers, sharing, “I really thank them a lot, from the bottom of my heart.”

That’s the very heart that has welcomed Eunice, who not only “completes” Roni’s sentences, but also completes her life.

Previous Post: « An Assistance Dog Brings Life-Changing Surprises
Next Post: A Journey and a Jedi Through Life’s Dark Side »