Marty Lukaszewski of Blaine, Minnesota, says, “God gave me a talent to teach.” So he took that talent and became a teacher, working at Minnesota Virtual High School. He works from home most of the week, but on the days he’s in the office he turns a lot of heads. His coworkers come running when they see Marty and his 50-pound black Poodle, Laverne. But she’s not there for looks—she’s there to work, just like Marty. As a Mobility Assistance Dog, Laverne plays an important role in Marty’s life, just like he does in his students’ lives. 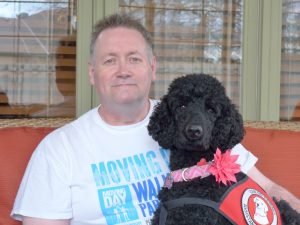 has Parkinson’s disease. Though he began experiencing symptoms in 1998 he wasn’t officially diagnosed until January of 2014. His symptoms include claustrophobia, tremors in his neck, arms and legs, having no sense of smell, a drop in blood pressure if he stands or bends too quickly, his hands can become rigid, and he can freeze mid-step while walking. He also struggles with balance, saying, “Two hours ago I lost my balance and hit the wall.” Marty attributes his sporadic symptoms and slow progression of Parkinson’s to his active lifestyle. Despite his challenges, Marty has a positive outlook. “I might have Parkinson’s but it doesn’t have me,” he says.

He and his wife, Jean, took a proactive approach to his diagnosis. Besides joining a boxing gym geared specifically for Parkinson’s patients, Marty researched Parkinson’s, explaining, “We were looking at what we can do to help me now and in the future.” When he brought up getting an assistance dog, Jean was originally against it. She feared that getting an assistance dog at this point in his diagnosis meant they were giving in to Parkinson’s, as well as being concerned that their resident Miniature Schnauzers wouldn’t accept another dog in the house. She came around to the idea after seeing all of Marty’s needs and learning how an assistance dog could help him. They settled on Can Do Canines when Marty says he found “nothing that matched what Can Do [Canines] was doing.”

Marty applied at Can Do Canines for a Mobility Assistance Dog in October 2016, then in February 2017 he was matched with the sweet but sassy Laverne. She helps with physical demands like retrieving items, helping Marty unfreeze by poking his leg with her nose, pushing buttons, opening drawers, and helping Marty get in and out of a chair. She is also a great motivator for Marty to take daily walks and play ball in their spacious back yard. Even Laverne’s new doggie brothers, Oliver and Winston, join in the game!

“Easter Sunday was a very tough day for me,” Marty says. Being in a pew at the crowded church service, Marty could sense everything closing in. “Tremors were very extreme. It was to the point where I was rocking because I couldn’t calm myself down. And Laverne sensed that that day,” he says. “She realized what kind of day it was for me. She planted herself right at my feet … she adjusted without any lead.”  Knowing that Laverne was there that day, and would be there for all the tough days to come, gives both Marty and Jean a peace of mind they haven’t had in a long while.

Part of what has made Laverne a good Mobility Assist Dog was her training. Puppy Raiser Volunteers, Pat and Dee Dee Heffernan, spent 19 months raising and training Laverne. “I am just so thankful,” Marty says to her puppy raisers, “The time and effort they put into training her couldn’t be easy … I am very appreciative.”