A few decades ago in her early 20s, Jo was about to start a role of educating others when she first became aware of a disability. “I failed a hearing test for student teaching,” she admits. Although she hadn’t even realized her hearing was as bad as it was at that time, she continually lost more hearing and went “through every hearing aid that there was.”

She then got a cochlear implant, but acknowledges she still misses sounds and parts of conversations, despite her best lip-reading efforts. Jo says, “I was withdrawing a lot socially because I wasn’t sure that I was hearing things.” She mentions that she always felt tense, wondering “Am I missing something?” 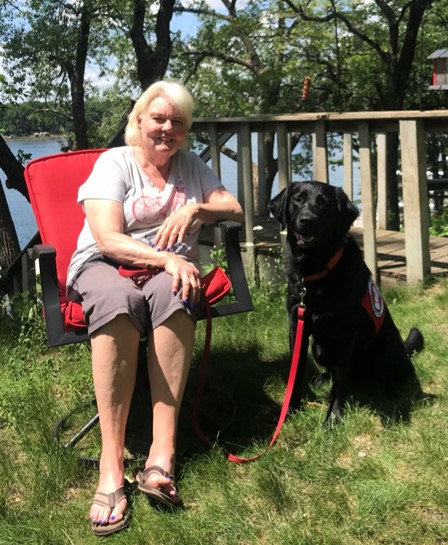 Beyond the social aspect, her lack of hearing also became a safety issue. “I was feeling unsafe in some situations because of my hearing,” she notes. “I had several situations where I was in real danger because of the hearing.” She describes one instance when she was taking a bath in a hotel room and the tub was leaking to the room below. As the hotel staff pounded on her door, she was unable to hear them. Luckily, no personal harm occurred, but realizing she needed help, Jo did some research and discovered Can Do Canines.

A wiggly, loving black Labrador Retriever named Gladys soon pounded on the door to Jo’s heart. Gladys is not Jo’s first canine love though. Jo has had dogs for much of her life and even showed them competitively for a while as an adult. In the 1990s, she owner-handled one dog to a status of fifth in the nation.

Gladys is quickly becoming a champion companion for Jo, who says, “I feel much safer. She makes me calmer and I don’t have to stress about what I’m missing.” With much less worry, Jo knows Gladys will always alert her to the sounds in their life because “she is listening for me.” When they’re out for walks and there’s a noise that Jo doesn’t hear, Gladys’s body language will give Jo a cue to that change in their surroundings.

Feeling grateful for this extra set of ears, Jo hopes that others will be willing to lend an ear to her voice. She fervently states, “I want to be an ambassador for Can Do Canines.” Now, engaging in this new form of teaching, she adds, “I have no problem telling people about my disability. I kind of feel like it’s my role to kind of educate too, so I tell them about Can Do Canines, and what she does for me. I like that!”