Andy Anderson worked in a manufacturing plant in the 1980s. One day he was running a smelter, melting down die cast and filling up molds weighing more than 250 pounds. He picked up one of the filled molds to load it into a bucket. “I heard a noise and I twisted and there went my back,” Andy says.

From there on, Andy became disabled and could not work. His back injury makes it difficult for him to bend over to pick up items and puts him at risk for falling when off balance. To stay safe, Andy uses a walker for long distances and a cane for short distances and, if needed, uses an electric scooter when shopping. 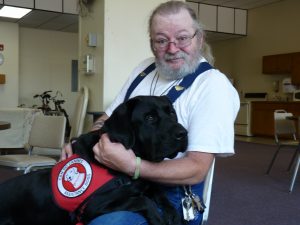 Despite weekly physical and occupational therapy, daily tasks were getting more difficult for Andy so he was looking for a solution. “I was looking for help because I drop things. I drop a lot of dishes,” he explains. When speaking with his doctor, they recommended he look into Can Do Canines.

Andy and his wife, Becky, are happy they did. Can Do Canines matched Andy with Mobility Assist Dog Ike, an attentive and happy Black Labrador Retriever who has made big changes in the couples’ life.

For one, Ike makes Andy more mobile. Ike acts as a brace if Andy needs the leverage, can open the refrigerator and apartment doors, and pushes handicap door buttons. Andy used to spend most of his time inside for fear of getting hurt. “I used to stay cooped up in the apartment all day,” he says. But with Ike’s help, Andy is more confident getting around. “I feel safer,” he explains.

In fact, Andy and Becky get out so much more now with Ike that they’ve lost weight. “[Becky] lost four pounds, I lost nine!” says Andy. And Ike’s body has changed too. “Ike’s put on quite a bit of muscle,” adds Leslie, Andy’s client services coordinator.

Andy is so appreciative of Ike and all his help. “Sometimes I think he’s smarter than me,” he laughs. He’s also grateful to the volunteers who helped raise and train Ike. “I want to say thank you to them for doing a wonderful job of raising Ike, training him. They did a fantastic job,” Andy says as he looks down at Ike. “I highly recommend [Can Do Canines] to anybody.”

Ike wouldn’t be with Andy if it weren’t for those who donate to Can Do Canines. “The people who contribute to Can Do Canines—they’re a godsend. I know that I could not afford a service animal,” explains Andy. “I know I can’t donate $100,000, but I’d love to be able to.”

Thank you to all those who made this partnership possible:
Great Start Home: The Hellquist/Heil family
Puppy Raiser: The inmate handlers at Stanley Correctional Facility
Special Thanks: Marlena Boldon
Whelping Home: The Herr family
Breeder Host: Nancy Sue Edgar
You: Thank you for your donations!