“It’s been a very emotionally challenging eight years as a mother,” admits Tiffany, mother of not only 8-year-old Lucas, who has autism, but also two younger children, including another who has autism.

Tiffany explains that Lucas struggles with his emotions. “[His] brain tells him everything to the extreme, sad, mad, nervous, even excited; it's heightened.” As he has grown up, Lucas has had a tendency to do what is called “elopement” if something would upset him. Tiffany says, “He would just take off running because he wanted to avoid those feelings.” If it happens while they’re on their way somewhere, like to therapy, the situation becomes downright dangerous. Tiffany describes, “I’d have to be sure to get a hold of his hand, right away, getting out of a vehicle. [That] was a struggle, because being a mom of three and Lucas being my oldest, I have two other kids who needed my hands as well.”

Tiffany’s worry was constant, not wanting any of her children to get hurt because of Lucas’ elopement. She expresses the emotional struggle as “knowing that my son’s brain is telling him things, and I can’t convince him otherwise.” 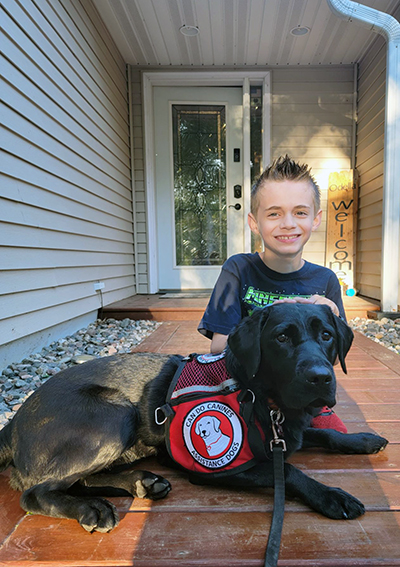 Although Tiffany’s mom was able to lend help at times, Tiffany knew that an assistance dog could have profound benefits. A 3-year-old black Lab named Demi has proven that to be true.

“Having Demi around helps me, and Lucas, with his elopement,” says Tiffany. The tethering even gives Lucas a sense of responsibility. “I tell him ‘Be sure you hold on to Demi, so she doesn’t run away,’ even though she’s attached to him and me,” Tiffany explains with a grin. She also gets a kick out of how excited Lucas gets when he gives Demi a command himself and she listens. He’ll even respond to her with something like, “Good girl. Listen to me, not Mommy.”

And Demi is not the only one Lucas wants to listen. Tiffany shares, “Lucas loves to brag about his dog to anyone who will listen.” In fact, the pride Lucas has for Demi and their unconditional love for each other warms Tiffany’s heart. Thinking of their future, she says, “I’m hoping that with Lucas having Demi, he will rein in his emotions, be able to be more socially appropriate, and grow.” Already, Tiffany sums up that Demi has made their life “a lot easier.”