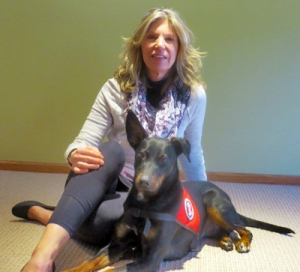 One of Sandy McKie’s favorite quotes is from Neale Donald Walsh, who states … “life begins at the end of your comfort zone.” Little did Sandy know that being diagnosed with degenerative adult onset hearing loss in both ears would make her live out of her comfort zone 24/7.

In the beginning, her life didn’t change drastically. The hearing aids, amplified phone, and audio assistance devices she bought helped. She told family and friends, but not co-workers, about her condition and life went on.

However, through the years, each check-up revealed increased hearing loss, and everyday life became more difficult. Sandy was grateful for the available technology, such as closed captioning and hearing aids, but as her hearing loss increased, so did her anxiety and lack of confidence.  Sandy, who works at a junior high school in Scandia, Minn., found herself relying on co-workers to alert her to the bells, alarms, and announcements she could no longer hear.

“At home, I wasn’t doing much better.” Sandy says. “I burned meals, had an oven fire—due to not hearing the timer—and was late for work because I couldn’t hear the alarm.”

When Sandy decided that a Cochlear implant was not something she was ready for, her audiologist suggested applying for a Hearing Assist Dog with Can Do Canines. Almost a year later, Sandy met Alea, a terrier-mix, adopted from the Animal Humane Society and trained by Can Do Canines. Sandy says that Alea has transformed her life in so many ways by alerting her to sounds both at work and at home.

“At home, Alea is able to alert me to alarms, timers and, because I live in a rural area, deer, crows and other critters,” Sandy says “At work, she alerts me to bells, announcements and drills. I am confident that if any emergency situation should arise she will alert me to that as well.”

Alea has even begun to alert Sandy to sirens when they are in the car. Safely harnessed in the seat, Alea will stand up and try to pace—indicating that she is alerting Sandy.

When she’s not working, Alea is like any other dog who loves to run outside, play and fetch. Sandy has begun having Alea pick up items such as keys when she drops them, because she can’t hear the sound. As a result, Alea has begun to pick up everything for a reward. Sandy is hoping that housekeeping will be next!

Sandy says she is eternally grateful to Can Do Canines for this gift of an assistance dog. She no longer feels sad or anxious about her hearing loss.

“Yes, my life will continue to change as everyone’s does,” Sandy says. “But with Alea’s help, she will push me past my comfort zone with confidence.”