Can Do Canines Training Guidelines 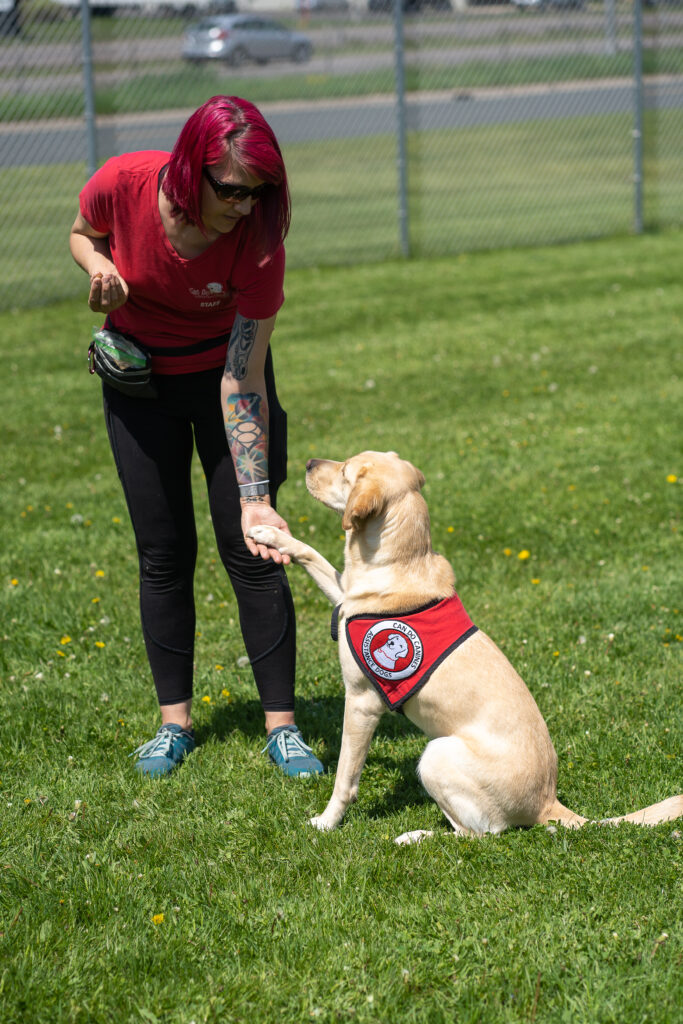 By training with positive reinforcement, you teach your dog what you want him to do, rather than reacting to behaviors you don’t want. If you have a dog who jumps all over visitors, it is much faster to teach your dog a behavior that is incompatible with jumping, such as sitting or running to a mat on cue, than it is to punish the act of jumping and leave the dog guessing what you want.

Try and notice your dog when he is doing something you like. Perhaps he’s lying quietly on his doggy bed instead of running around the house. Maybe he's chewing a bone instead of your slippers. Or perhaps he’s sitting nicely, wanting to be pet instead of pawing your leg, etc. By giving your dog a quick word of praise, belly rub, or even a surprise treat, you can reward calm behaviors instead of only giving attention when the dog is acting out.

A reward can be anything your dog wants at that moment. Most trainers use food since it is very quickly dispensed and all dogs need to eat! Using food gives the ability to go through many repetitions in a short period of time. However, the best rewards are anything your dog is pining for at that time. For example, if you have a dog who loves to sniff continually on a walk, then using sniffing as a reward will result in a dog that learns how to earn sniffing. This will also mean that you are no longer competing with the environment for your dog’s attention. Using toys during training can also be a great way to show your dog that training is fun and how to think when excited.

A major fear of many handlers is the thought of having to carry around treats forever. At the beginning of training, this can be the reality; your dog needs to know that what he is doing is correct. The more you vary the rewards given in training from food to toys to life rewards, the easier it is to transition off treats. Life rewards are those little things your dog usually gets handed to him throughout his day.  Examples are opening a door to let the dog outside, going for a walk or car ride, and snuggling on the floor. Instead of only asking for behaviors when treats are present, having the dog do something in order to get a life reward strengthens that behavior.

To teach a behavior, there are four methods positive trainers commonly use: luring, targeting, capturing, and shaping.

Luring is using a piece of food like a magnet to direct your dog. Where your dog’s nose goes, the body tends to follow. Luring is the quickest method of getting simple behaviors, but it involves the least amount of thinking on the dog’s part. A trainer has to be careful to fade their lure as quickly as possible or they end up with a dog who doesn’t know what to do when the food lure is gone.  Oftentimes, treat-luring transfers nicely to a hand lure.

Targeting is similar to luring, but teaches the dog to follow, or go to, some object such as a lid or sticky note. Trainers often differentiate between a nose touch and a paw touch depending on what behavior they are teaching. While luring has the animal focused on the food, targeting has them focused on the actual behavior so this is generally preferable to luring.

Capturing is waiting for the animal to do something you like and then rewarding the animal. It is useful for teaching tricks that you cannot get the animal to do any other way, such as shaking its body (like after it gets wet), yawning, etc. Simply set up the situation where your dog commonly does the behavior and wait. Capturing is also an ideal way to reward relaxing behaviors or attentive behaviors your dog does in the house or in public.

Shaping is breaking down the behavior into smaller steps and rewarding each piece. Once your dog is about 80% successful at the current level, raise your criteria so he has to do the next step to get rewarded. It’s a balancing act between staying too long at one stage versus moving up too quickly. The key is to take baby steps so you have a high rate of reinforcement.

Shaping is often used alongside luring, targeting, and capturing when training complicated behaviors. Free Shaping is the term used when you are not also luring, targeting, or capturing a behavior. In free shaping, you are silent and still as you train and wait for the dog to offer a tiny behavior. This method creates a thinking dog, and as both the trainer and the dog progress with the method, it results in very fast learning. A dog who knows he can cause a reward to happen by doing something is called an operant dog.

It is important to remember that you are teaching your dog a foreign language. Don’t be tempted to use a cue until your dog is reliably doing the behavior in its entirety.

For example, you want the dog to learn that down means to lie down so elbows touch the floor. It doesn’t mean to stare at you blankly or follow a treat to the floor which is what your dog will think if you say it from the start. Get the behavior you want, THEN name it. A good rule of thumb is not to give a verbal cue until you can predict the dog is going to do it. Then give the cue right BEFORE the dog does it.

The order of this process is:

A verbal reward marker is a useful tool in pinpointing the exact moment the dog did something you like. It is similar to taking a picture of that moment, as it freezes the specific behavior you wanted to reward even if the dog continued to do other things after saying the marker word. The word is not an attention-getting tool or interchangeable with praise but is a way of communicating with your dog what you want.

Can Do Canines uses two verbal reward markers: yes and find it. When used, yes marks and ends the behavior. The reward delivery is from your hand to the dog’s mouth. Find it also marks and ends the behavior but tells the dog their reward will be tossed away on the ground. It’s useful for creating movement and resetting the dog to start a new attempt.

Rules of the marker word:

You will not need to use the marker forever. Since the marker is used to tell the dog what part you liked, it is no longer necessary when the dog truly understands the behavior. At that time, you can reward without marking and transition off food and toy rewards and into life rewards.

Training is best done in short increments, ideally no longer than 10 minutes total per session and no more than 3 minutes on any one behavior. It is okay to teach multiple things in one session; puppies are quick learners! Training will be more fun if it is treated as a play session. Tugging can be a great reward and make it easier to transition off the use of food.

Using the dog’s meals as a training session can be an easy way to get in 2-3 sessions of training each day. Instead of just having the dog sit and wait for dinner, dish up the food and set it on the counter. Use the pieces of kibble to practice the different skills and behaviors you are working on.  When done with the session or to reward an especially good effort, give your dog the remainder of the meal. Or if you really want to earn a gold star, vow to feed all of your dog’s daily rations throughout the entire day, do multiple sessions, and never have to use a dog dish again!