As a bus driver for Metro Transit and later for Greyhound, Michael Powell experienced the allure of the open road. But seven years ago, his driving career came to a screeching halt when he suffered an on-the-job back injury. Severe back pain, exacerbated by peripheral neuropathy, made it impossible to continue commercial driving. 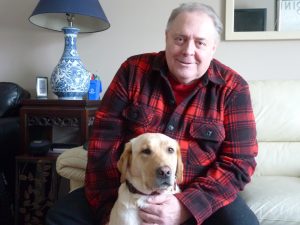 Although he can’t log the miles like he used to, the New Brighton, Minnesota, resident definitely doesn’t sit still, thanks in large part to Zelda, his Can Do Canines Mobility Assist Dog. With Zelda by his side, Michael does a lot of walking—up to four times a day for a total of three miles.

Zelda’s presence and proven ability have made a real difference in Michael’s quality of life. “I’m able to go out in public more often, knowing that Zelda has my back—quite literally!” he laughs.

Michael’s health conditions create a risk for falling. Thankfully, Zelda is trained to bring him the phone from any room in the house. “Prior to Zelda, I once laid on the floor for 20 hours before I was able to get to the phone for help. While I haven’t had such a serious episode since then, it’s a great comfort knowing that Zelda will get the phone for me immediately,” he says.

Zelda assists Michael in other ways, such as opening doors, drawers, and even the refrigerator. “Though I can do most of those things Zelda helps me with tasks that are becoming increasingly difficult.”

In addition to his physical issues, Michael suffers from post-traumatic stress disorder (PTSD). Zelda to the rescue! Michael explains, “When I’m stressed, she’s very comforting and visits me often, placing her head on my chest. She seems to be keenly aware of meeting my physical and emotional needs.”

Then there’s the pure joy that Zelda brings to Michael’s life, from delivering wet kisses to playing fetch. “She loves to play with her red rubber pig. Often times, she throws it up and catches it in midair before it ever hits the ground. She’s so fun to watch during play time!” he laughs.

Michael feels deep gratitude toward everyone who made it possible for him to receive Zelda free of charge. “This is something I couldn’t have afforded on my limited income.” He adds that he makes a financial donation to Can Do Canines whenever he can. “I know it makes a difference, because it’s making a difference in my life. There’s always somebody worse off than you. Someday I may be that person who’s worse off, but for now I can help out.”

Special Thanks: The Balgaard family, the inmate handlers at FPC Duluth