“Persistent” is one way Deanna describes her canine partner, Gracie. Since that trait is especially desirable for a Diabetes Assist Dog, Gracie was cast in the perfect role.

Certified in 2014, this team has become completely in tune with each other. One way they’ve done this is through dog agility training—something they began within the first year together. Deanna says she started agility work with Gracie so the two of them could become more cohesive. “The stronger the bond, the better the alerting,” she asserts. “I had to learn her language and she had to learn my language.” 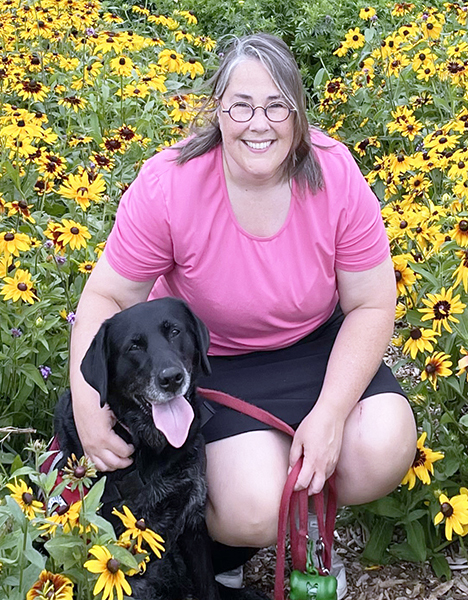 The two easily speak freely to each other now, even when Deanna purposely makes variations in her sound. She explains that she practices saying key retrieval words such as “phone” to Gracie in different tones of voice in case she would ever be slurring her words during a blood sugar low.

Gracie also hears the command “tabs” frequently, being diligent at fetching Deanna’s glucose tablets as needed during lows. The need to do so is preceded by Gracie realizing that low for Deanna, usually before Deanna’s equipment does. “She's ahead of the game,” says Deanna.

Gracie can even distinguish Deanna’s blood sugar level through the aroma of newly cut grass when Deanna is mowing the lawn. Deanna describes, “Normally she’s in the yard, sniffing all around, looking for, you know, good smells. But if she's following right behind me, that's been a sign for me to stop and go check.”

As a nurse, Deanna had to learn to be a little agile herself, due to the pandemic. Required to wear an N95 mask on the job, she knew that Gracie might have a harder time picking up on the blood sugar scent. She says, “I would just lean over at my desk and she would smell my mask, and then she would go back and lay down.”

At work, Gracie is a big hit. Deanna admits, “I'm no longer Deanna. I'm Gracie's mom.” The pediatric patients gush over Gracie the most, and the feeling is mutual. “You can just tell,” says Deanna. “Her tails goes a mile a minute and she's happy.”

Though Gracie will be 10 years old this December, her ambition hasn’t diminished. Neither has Deanna’s appreciation of what Gracie brings to her life. Giving one example of how Gracie has brought reassurance to her, she shares, “I can take a hike by myself and not worry.”

Seeing the bigger picture, she believes, “[Can Do Canines really gives] people the ability to be independent and comfortable with what they’re dealing with. Gracie totally means so much to me and I know I've met other Can Do Canine teams that have felt the same way.”

With that in mind, Deanna has remained a strong advocate for Can Do Canines in various ways over the past decade, saying, “I want to see other people have that freedom that a dog can provide.” And she’s persistent in helping to make that happen.