Can Do Canines, a nationally recognized leader in the placement of assistance dogs for people with disabilities, has selected Jeff Johnson as the new Executive Director. Johnson will begin at Can Do Canines in December. 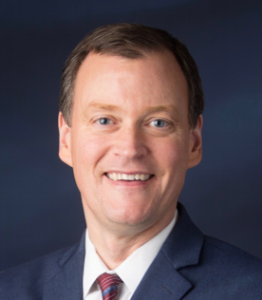 Johnson comes to Can Do Canines from his role on the Board of Hennepin County Commissioners where he has served since 2009. Supporting people across the state of Minnesota through both elected office and volunteerism is a passion for Johnson. He has held numerous civic leadership positions at organizations including Northwest Twin Cities Young Life, Community Action Partnership of Hennepin County, and Governor’s Workforce Development Council.

Johnson was a member of the Minnesota House of Representatives from 2001 to 2006, serving as Assistant Majority Leader and Chair of the Civil Law Committee. He was a two-time candidate for Governor of Minnesota.  Johnson is also the founder of Midwest Employment Resources, a law practice focused on human resources topics. He holds a JD degree from Georgetown University Law Center and is licensed to practice law in Minnesota and Illinois.

Chair of the Board, Mitch Peterson shared: “We are so fortunate to welcome someone of Jeff Johnson’s caliber and experience; he will be 100% focused on advancing our mission of enhancing the quality of life for people with disabilities.”

Johnson takes over for long-time leader and founder Alan Peters, who is retiring at the end of 2020 after 31 years.  Under Al’s leadership, Can Do Canines has had a significant impact in the community, including:

Johnson commends Alan’s contributions to Can Do Canines —”The legacy that Al Peters and his team have created is really extraordinary, and I’m so thrilled to play a role in extending that legacy to serve even more people,” he said. Board Chair Peterson added, “Jeff is perfectly matched to protect the legacy that Al Peters has established to carry our impactful mission into the future!”