Assistance dogs fill many different roles around the house. They play the part of doorman by tugging doors open, and housekeeper by cleaning up toys. Flynn the Black Lab, a Mobility Assist Dog, fills all these roles, but perhaps his most impactful role is that of motivator. 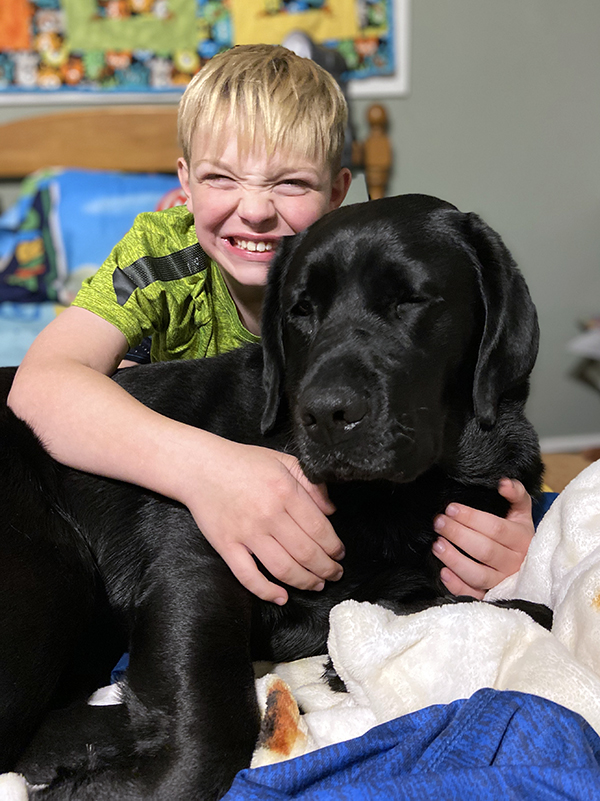 Flynn is paired with Drake, a 10-year-old living with cerebral palsy. When Drake was around 7 years old, his parents started looking into getting a service dog to not only help accomplish tasks, but to be a lifelong friend for Drake. “When we looked into Can Do Canines, we thought that Drake would really benefit from a little best friend that’s always going to be there for him, no matter what,” said Drake’s mother, Michelle.

Having heard about Can Do Canines from both a doctor and a friend who worked with the organization, Diane reached out and explained Drake’s situation. “What really drew me towards Can Do Canines is the fact that all [costs associated with the dog were] covered by so many different [donors and] sponsors, and that [the dogs] had years of training,” said Michelle. After a few days of training at the Can Do Canines facility, the family brought home Flynn, a calm and stoic black Lab who still contains plenty of energy for playtime.

Drake struggles to pick up and hold objects due to low muscle tone. He uses a rear walker with a hip bar or forearm crutches to walk around. While he is an overall strong child, he struggles with poor balance and neurological interruptions. Flynn assists by picking up things, opening doors, retrieving his leash and cape, closing drawers, carrying packages, and soothing Drake when he gets overwhelmed. Flynn can even bring Drake’s walker and shoes over to him.

The most notable form of Flynn’s assistance happened during a therapy session. Drake’s disability requires daily exercises and physical therapy, including pool therapy with his mom, a certified child-and-teen Crossfit trainer. Prior to Flynn’s arrival, pool therapy proved difficult and scary for Drake. “I’ve been doing one-to-one pool therapy with him for eight years, and he would not even try it,” said Michelle. But with Flynn around, Michelle has noticed a considerable boost in Drake’s performance. “He says, ‘Watch me, Flynn!’ Then he lets his hands go of the wall and walks in the pool!”

Having Flynn present at therapy encourages Drake to do his best. “When we do therapy, Flynn sits there and watches him the whole time,” said Michelle, “and Drake wants to show off for him, he wants to show Flynn that he can walk. It’s really pretty sweet.”

Michelle hopes that as Drake’s confidence increases, her son will grow more independent with Flynn’s assistance. “I hope that Drake really wants to do everything 100% on his own with Flynn as his little right-hand man. Slowly, I have seen that definitely happen,” said Michelle.

The Can Do Canines Experience

Flynn’s success comes from his training process at Can Do Canines, including the prison training program. For Drake’s family, one-on-one training like that proved rather important, and they could not be more appreciative for the trainers and donors.

“This dog only speaks kindness, and you can tell. The people that you’ve found to help put these dogs together only speak kindness and it comes from their heart. To see that there are people out there like that is absolutely incredible,” said Michelle.

Without donations, this story would not be possible, and Drake and his family extend their thanks to all donors and trainers at Can Do Canines.

Frasier the Wonder Dog Comes to the Rescue
Next Post: One Look Says It All for Kim and Mobility Assist Dog Mazie