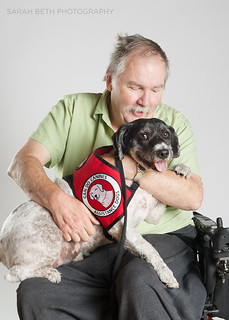 A shelter dog that can alert to sounds, pick things up and clear your apartment of intruders? Must be a Can Do Canine!

A couple years ago, Greg Lawson and Mobility Assist Dog Oreo were coming home to their apartment in Minneapolis, Minn. Upon first entry, Oreo began to scamper from room to room, sniffing around as if something was amiss. He arrived at the bathroom to find the door closed and an alarm went off in the little Cockapoo’s mind … Something’s behind that door! Oreo started to bark continuously. Greg realized something was wrong and called the police. Minutes later, officers came and hauled out an intruder from behind the door. The man was so frightened by the bark of the 35-pound dog he had refused to come out!

But Oreo’s skills extend beyond thwarting home invasion. Adopted from Minneapolis Animal Control by Can Do Canines in 2007, the energetic little pup showed early promise as a Hearing Assist Dog due to his energy and size.

“He still exercises those skills,” Greg says. “I have a neighbor who stops by and knocks on my door very softly. Oreo barks and comes get my attention, alerting me every time. I find it very helpful!” 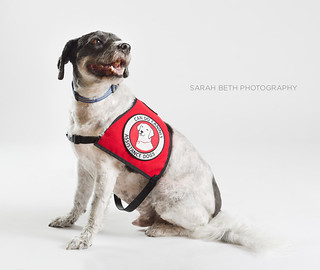 But what Greg needed help with the most was mobility issues. He was diagnosed with diabetic neuropathy in 2003. The diabetic complication, often resulting in nerve damage, had left Greg with no use of his legs below his knees. He found himself with limited strength and after a knee replacement, his situation continued downhill until he needed the use of a wheelchair to get around. So Greg applied to Can Do Canines to help him live the full life he knew he had ahead of him.

“I have a tendency to drop things and the smaller stuff is hard … pens and pencils. I’m in a wheelchair, so it’s a lot easier to have someone get it for you than to bend over and risk falling out,” Greg says.

Greg was hoping for a smaller dog for his apartment and as the trainers began to recognize Oreo’s quickness to learn, they realized there might be a Mobility Assist Dog hiding under that black and white fur.

“If I drop something, all I have to say is ‘Oreo go get it’ and he will. He’s just amazing.” Greg says.

In addition to helping Greg pick up dropped items, feel safe at home, and help get around, Oreo is Greg’s companion everywhere he goes. At Greg’s job at a non-profit in St. Paul, the little cockapoo waits patiently under his desk. They ride the light rail together, go see fireworks every year (where he surprisingly doesn’t mind the noise!) and even travel the world. Accompanying Greg on a cruise throughout the Bahamas, Oreo quickly became the star of the whole ship.

“People had no idea who my friends and I were, but everyone knew Oreo!”

The two have been together for over nine years now and Oreo remains ever present, alerting, protecting, assisting … doing whatever he can to help his partner.

“Overall, this little assistance dog makes everything easier for me, all the time.” Greg says.

The photos above were graciously taken by Sarah Beth Photography as part of her “Rescue of the Month” series. To view all the photos from this session visit our Flickr Page.

Previous Post: « A Dog Who Loves to Work
Next Post: Can Do Canines Receives $5,000 Charitable Gift from PetSmart »