At age 13, Preston is big for his age at 5 feet, 10 inches and 160 pounds. He’s also fast, being able to easily outrun at least his mom, if not his dad. In the past, Preston’s Autism Spectrum Disorder has caused him to bolt from his parents and to have emotional meltdowns in public. When he was a toddler, those situations weren’t nearly as dangerous and troublesome, but parents Nikki and Corey knew to get help for Preston before their situation got out of control.

They applied with Can Do Canines when Preston was just 3 years old and were first matched with Autism Assist Dog Kona a few years later. Kona changed Preston’s world. He helped him sleep through the night and navigate life with less stress. For several years, Kona provided Preston and the rest of the family with greater stability and peace of mind.

However in 2020, Kona unexpectedly passed away, creating a sudden void in their lives, and a potential threat to Preston’s safety. Feeling sad and confused, Preston regressed to some of his younger tendencies. After a particularly bad meltdown when Nikki and Preston’s personal care assistant had to physically carry him from a store, the family felt they could no longer go out in public with Preston unless absolutely necessary. 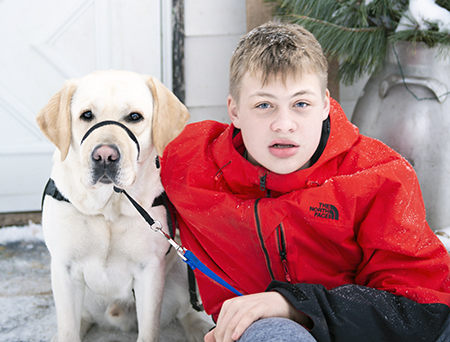 Nikki and Corey knew their best course of action was to apply for a successor dog, but Autism Assist Dogs are not typically trained for handlers of Preston’s size. Can Do Canines came through for the family with a second yellow Labrador Retriever, Nelson, to step into Kona’s big shoes. Again the change in Preston’s behaviors was instantaneous. Nikki says of Preston’s latest transformation, “I think it’s giving him way more independence, less anxiety and better sleep. He seems to be healthier because of that, and just happier.” Also, since Nikki home-schools Preston, both of them are excited that they will soon be able to resume field trips. With Nelson, she says, “There are more opportunities to do things and learn.”

Serving as a calming presence is one of Nelson’s best capabilities. When Preston is in learning mode, he relies on having the dog close by. “Just having him under the table there,” Nikki explains, “Preston can sit and rub his feet on him there and he knows he’s there. It just relaxes him.” Nelson is also a pro at retrieving a weighted blanket for Preston and playing ball with him. Keeping Preston from leaving a safe area is especially important though. Nikki notes, “He could drag the dog. He could unclip the leash. He just doesn’t want to. I think he feels safe. He knows he can trust the dog. [Nelson’s] not going to let him go into danger.”

Grateful for not only Nelson, but also their overall experiences with Can Do Canines assistance dogs, Nikki shares, “I don’t think Preston would be this successful in life right now if he’d never had one. I don’t think he would have made the progress he’s made because he wouldn’t have been able to go into the public as much and learn. It gave him opportunities he didn’t have.” With those opportunities coming without a price tag for the family, Nikki admits that cost would have been a barrier otherwise. Plus, considering that they live in rural Cambridge, which is not near a service dog organization, she commented that traveling somewhere for training was out of the question. ““Oh yea, that’s not even possible. That’s a big deal, the way you guys do it.”

What’s also a big deal? The way that Nelson stepped up to handle a big opportunity for his new, big buddy.

Volunteer Spotlight: Sarah Bliss
Next Post: A Veteran’s New Buddy to have his Back