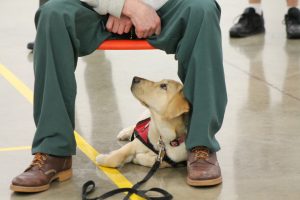 In this article, we’ll venture across state lines and look into how three correctional institutions in Wisconsin are helping raise future assistance dogs.

Inmates who are interested in becoming a handler must complete an application, pass a background screening, and have an interview with prison staff to explain why they want to participate in the dog-training program. They must also be recommended by two prison staff members, who take into account each inmate’s record of behavior since entering the prison.

Once accepted, two inmate handlers are paired together and receive a 4-month-old future assistance dog who will eat, sleep, work and play with them for the next year. The partnerships with other inmates serves as a bridge for conversation. One inmate says, “Myself and another handler have since had some very good conversations that we would not have ever had before this program. We’ve talked about race issues, our experiences growing up, preconceptions we had. It’s really been an eye-opener. Sometimes we disagree and that’s okay because we always work through it. We now have a great deal of respect for each other.” 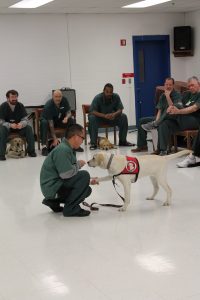 Can Do Canines Prison Program Instructor Dyan Larson leads the inmates in weekly classes where they learn how to teach the puppies manners, basic obedience and early assistance dog skills. Life in prison for the puppies isn’t all work and no play—the puppies get plenty of love and attention. The inmates take their puppies on the outdoor track for exercise and give them plenty of play time in the yard. They provide round-the-clock attention, and the puppies love it!

Inmate handlers express appreciation for the program and the sense of purpose it gives them, saying, “It has changed me for good. I’m a better communicator and I’ve learned to be open to different ideas. It’s taught me to be humble and listen more. I’ve learned quite a lot! I’m building relationships and opening up conversations with people I wouldn’t normally have had a reason to talk to. It’s opening doors for me.” 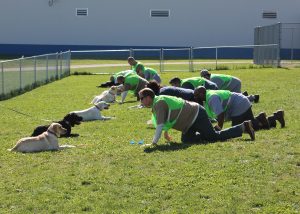 But there are some things these puppies cannot experience in prison, such as children, busy malls, other animals, household appliance noises, and more. This is where Prison Foster volunteers come in! This group of dedicated volunteers take each puppy out of prison two weekends per month and expose them to as many new sounds, people and places as possible. Between the Prison Foster volunteers and the inmate handlers, our Wisconsin program creates excellent future assistance dogs, and we are so grateful for their efforts.