Home / News / A Veteran’s New Buddy to have his Back

People who serve their country often live out their role as caretaker, not regularly considering ways they could seek help for themselves.

Through serving two tours in Vietnam, establishing a family, continuing to work, and finally retiring, Gary has been dedicated to keeping others safe. However, after a rapid decline in his ability to hear, he realized he would need help to remain aware of important sounds around him. Gary has worn hearing aids since the late 80s, still unable to hear some pitches with them in. At night when he takes them out, he’s nearly deaf. Growing up in a loud work environment, followed by artillery noise levels in the military, likely caused progressive hearing loss throughout Gary’s life.

Though he found ways to adaptively engage with his environment, he felt his family’s safety slipping out of his control. He was especially anxious at night when his wife, Deb, was left entirely in charge of the household’s security. He would not be able to hear intruders or any of the smoke alarms in the home to notify others. Gary’s daughter-in-law encouraged him to learn about Can Do Canines and having a Hearing Assist Dog of his own. After attending a presentation and speaking with founder Al Peters, Gary decided to pursue the application process, which brought a new set of ears into his life. 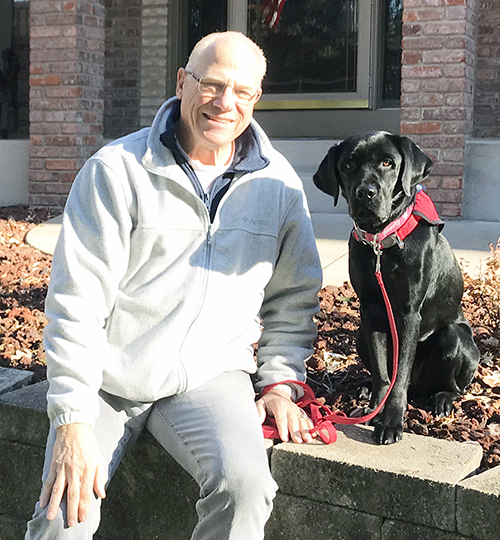 Gary says the wait for the right match was challenging but justifiable since, “A quality place takes their time to ensure that everything is in line.” That insight and patience was reinforced the day he was partnered with Marly, a 2-year-old Labrador Retriever. Her coat is black as coal but her spirit shines brightly for everyone she encounters. Gary remembers meeting Marly, “I was nervous but she didn’t seem nervous at all! I knew right then I’d be able to love and care for her, and that we’d be a good team.” Excited to have her home, Gary still worried about being the best possible client for the organization and partner for Marly. Seeing her personality open up as she settled in was tremendously rewarding, and Gary enjoyed watching their bond evolve. “I’m in awe, actually. Other people that see us together are just amazed at how well-behaved and well-trained she is.”

Marly has transformed Gary’s world by bringing his attention to noises he can’t hear, then literally bringing him to the source of the sound. She alerts and shows him to the doorbell, the smoke alarm, a timer on his phone, and even Deb calling his name. One day his grandchild called for him downstairs and Marly alerted Gary to the request a floor away from them. He comments she is always alert and listening, ready to work even when she’s not constantly needed. “It’s like having another child. She’s wonderful.”

Thanking Others for Their Service

Gary reflects that it’s difficult for able-bodied people to understand his limitations, physical and mental. Not everyone can realize how much anxiety a disability can cause, but now he celebrates more independence and safety with Marly “having his six.” “Her behavior is exemplary; I thought my past dogs were well-behaved, but they’re nothing compared to the work that’s gone into this. I’m in awe of the expertise, and the professionalism, and the time, and the giving,” Gary says of his experience with Can Do Canines. His family has been incredibly supportive in loving her from a distance, and recognizing she is in the family for a special reason. Gary tells everyone who has served this community, “She’s an amazing animal, and to have that available to me is just humbling. I’m in awe and thankful, I never thought I’d have an animal that’s as able as she is to do her job. I thank Can Do Canines.”

Big Enough to Overwhelm a Dog, Smart…and Calm…Enough to Not Want To
Next Post: Many “Got Luce” at Recent Event