Cerebral palsy is a disorder that affects body movement and muscle coordination. But Levi hasn’t let cerebral palsy slow him down. A full-time employee, Levi’s average day consists of a mile walk to and from the train station, a 45-minute train ride, and then working the sales floor at Best Buy. He walks, on average, six to seven miles a day.

In fact, after Levi was matched with Mobility Assist Dog Dempsey, he purchased a FitBark, a device that tracks a dog’s steps, to see just how far the two ventured each day. 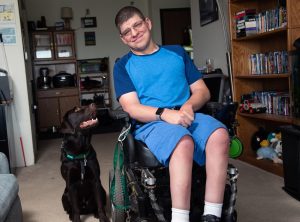 Dempsey loves the exercise, and Levi appreciates how Dempsey helps him throughout the day. “He’s my right-hand man,” he says.

Rewind back to before Dempsey came along.

Levi has trouble bending over. “With this chair, it’s got an elevator so that puts me up a few inches higher than I would normally be, which makes picking up things off the floor difficult, especially if they’re thin things like debit cards,” he explains.

If Levi dropped something in public, he had to rely on a stranger to help him. Unfortunately, this could be a risky decision. “Sometimes you gotta do what you gotta do, and you cross your fingers and hope they don’t run off with your phone,” he explains.

In the fall of 2017, Levi noticed a change. “I realized things were getting a little bit more time and energy-consuming: opening up doors, pushing buttons, picking up keys that I dropped regularly,” he says. “It was just taking more time and energy.”

He felt he was ready for an assistance dog and remembered Can Do Canines, which he learned of through his employer. He thought, “I’ve heard of this organization. Let’s give them a shot.”

And that shot paid off. Now Dempsey is there to bridge the gap for Levi. He says, “If I drop my wallet on the light rail station, [Dempsey’s] there to pick it up, and I don’t have to worry about maneuvering correctly to pick it up … he’ll just grab it …in the five seconds it takes him to grab it, it would take me two minutes.”

But Levi isn’t the only one happy to have Dempsey around. “Everyone at work is super excited and has seen the benefit that we bring to each other,” Levi says.

Dempsey even has his own ID badge. “My co-workers wanted to get him a blue shirt like I wear. I kind of had to put my foot down and compromise with a name tag.” he smiles. “Occasionally it comes flying off if he shakes. But for the most part, it stays put,” he laughs.

When asked what it’s been like working with Dempsey, Levi looks up, smiles, and thinks a moment. “Everyday’s an adventure. It’s been a life-changing adventure.”

“He gets up, I get up, and we’re both excited to start our day,” Levi says. “He knows that we’re gonna go to work and we’re gonna meet people from around the world.”

“We took a trip to Chicago a few weeks back, and it’s about an eight-hour train ride,” he says. “It wasn’t until we got off the train back in St. Paul that anyone even noticed that he was on the train. He laid there quietly the whole entire time.”

When asked about everyone involved in raising and training Dempsey, Levi takes a deep breath. “Wow, I think about this and I go, these people put in so much time and energy and love for these dogs and they give them up selflessly because they know that they’re gonna go on to do greater things,” he says. “Even me just saying thank you I don’t feel is enough because [they have] done so much for people like me.”

And to those who make it possible for Can Do Canines to provide these dogs free of charge, Levi explains, “These dogs impact not only their handler’s lives but the lives of the people around them. You are making a dog’s life and a person’s life better by donating.”

“These dogs are gonna go into homes where they’re gonna not only be helpful … but they’re going to have unconditional love. And I think any animal deserves that.”

Special Thanks: The U of M FETCH program, The Leech Family