Home / News / A Brighter World Because of You 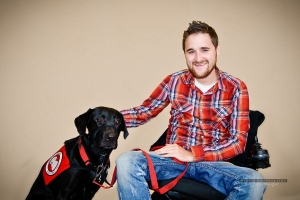 “Porter is one of the best things to ever happen to me. What he brings to me, in addition to physical support, is joy and companionship.”

When Chad Wilson shares this over the phone about Mobility Assist Dog Porter, you can hear the smile on his face. A large dog, weighing in at 75 pounds, Porter has an ample personality to match. Chad describes him as a “funny guy” with a love for squeaky toys. Chad says Porter shakes his whole body and jumps around like a “bucking bronco” when he’s excited.

Chad’s mother Sandy says, “Porter is, most importantly, Chad’s companion. He’s always there for Chad, and it’s clear that for Porter, Chad is number one. If you could see the way they interact, you would have no doubt.”

Chad was born with muscular dystrophy, a condition which causes progressive weakness and loss of muscle mass. He was diagnosed at age four, and received his first electric wheelchair when he was 14 years old. Sandy says that the wheelchair has sometimes been a barrier, but that Porter serves as an “ice breaker,” encouraging people to approach and engage socially with the two of them.

“Because of my disease, I get progressively weaker, and certain things become more difficult for me. I always try to find a way around these difficulties, which is where Porter comes in.”

Chad’s main concerns are falling and the loss of his ability to bend over and pick things up when he’s dropped them. He has worked hard to stay as independent as possible in his daily life, and that continues to be his primary goal. 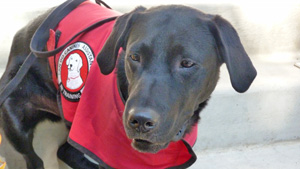 “Porter is a great help in making that possible.” Chad says.

Porter acts as a brace for Chad when he falls, and retrieves any items he may drop. He’s also been trained to get the emergency phone in case Chad needs some “non-canine” assistance,

Porter is extremely well-trained and well-behaved when the two are out in public. Chad says he’s smart enough to know when he needs to be “on point” and paying attention, but also knows when he can let loose at home. Chad continues to play wheelchair hockey, and now also plays soccer. Porter knows the drill and waits patiently on the sidelines until the games are over. The duo make quite an impression. After meeting Chad and Porter, one of Chad’s soccer teammates also decided to apply for an assistance dog with Can Do Canines.

To sum up their partnership, Chad says, “Having Porter is having peace of mind, knowing I can go out into the world and not have to worry about the things I can’t do on my own. Porter allows me to have independence. Without Can Do Canines, I wouldn’t have Porter, and in turn, my world would be a little less bright.”