For eight years, Alex Cracraft of Fridley, Minnesota, and his Autism Assist Dog, Windy were an awe-inspiring team everywhere they went. With Windy’s love and support, Alex has become more confident and independent—an outcome which has thrilled his parents, Rich and Laura. 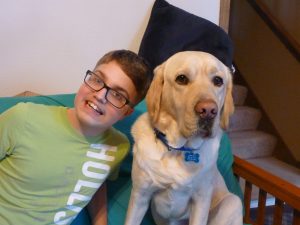 Alex and Windy teamed up after the Cracraft family learned about Can Do Canines at an Autism Society Skills session. Alex was eight years old and in second grade.

Now a junior in high school, Windy gratefully retired from active partnering with Alex in December of 2016. At age 10, she was slowing down and had a difficult time climbing the steps onto the bus or at school. She also was having trouble keeping up with Alex, which was frustrating and stressful for them both. Windy remains a much-loved member of the family, enjoying her new, quieter life.

However, having an Autism Assist Dog was vital to Alex’s continued development and independence, so the family turned again to Can Do Canines—and so entered new friend, Comet.

“Students at school knew Alex with a dog—it gave them a conversation starter and a means to be open to Alex and learn who he is as a person,” says Laura. He didn’t know how to initiate conversation, but when students would be curious about Windy, he had a script to use to tell them about her, which helped him grow more confident in social situations.

His mom credits the support of an Autism Assist Dog  as the reason Alex is the social person he is today. “He knows practically everyone at school,” she says. She recalls the day Alex’s paraprofessional told her about the difference in Alex with his Autism Assist Dog. “Just the way he walked when he was holding the leash was amazing!”

After Windy’s retirement but before Comet, Alex did pretty well at school. But his mom noticed that without his dog, Alex would “hold it together” during the school day but needed to “let it out at home.” Now having Comet with him at school means he doesn’t need to carry as much anxiety with him during the day. There are fewer meltdowns at home and he is sleeping better.

Even today, Laura admits to being self-conscious about the possibility of uncomfortable “melt-down” situations in public and how others might react, and is grateful for the opportunity that Comet offers for people to ask questions and learn more about autism and Autism Assist Dogs.  “We’ve always been open to sharing our experiences with others and welcomed questions and opportunities to educate others about the benefits of having an Autism Assist Dog,” she says.

Comet is doing well in his new role and discovering where he fits in the family. Laura reports that Alex is helping train Comet, working with a counselor to learn how to temper his tone of voice when he gives commands to Comet. She continues to look for ways Comet can help Alex with everyday chores and taking care of himself.

Alex and his parents plan for him to continue his education after high school through the Achieving Independence & Maturity (AIM) Program at Lionsgate Academy, with the ultimate goal of Alex being able to live in a group home. The AIM Program is for students ages 18-21 who are seeking to become more independent in the areas of independent living, employment, and post-secondary education, and primarily serves students on the autism spectrum. Through this program and with Comet’s continued help and support, Alex’s family has no doubt that he has a bright and independent future.

Previous Post: « This Winter Will Melt Your Heart
Next Post: The Biggest Love Bug in the World »